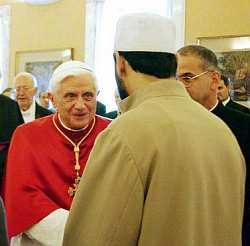 “The meeting,” said Abdellah Redouane, secretary-general of the Islamic Center of Rome, “went very well. It was an important step forward after the series of clarifications that followed the Pope’s lecture in Regensburg. We have gone beyond the tensions of the past several days, and now we should intensify our efforts to favor ongoing dialog. It is important for world peace.”

Klalid Chaouki spoke for the Consultative Council for Italian Muslims: “Benedict XVI was very clear in stating the need for dialog, and we invite the Muslim world to welcome his words of great esteem and recognition, and pursue the course he suggests.”

The Pope was given a crate of dates, a book on Mohammed and another on the Virgin Mary by Mohammed Nour Dachan, president of UCCOI, who also gave him a letter asking him to be a sponsor for the fifth annual celebration of a Day of Christian-Islamic dialog onb October 20, which will be the last Friday of teh Muslim fasting month of Ramadan.