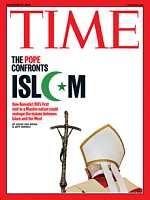 Few people saw this coming. Nobody truly expected Benedict to be a mere caretaker pope — his sometimes ferocious 24-year tenure as the Vatican’s theological enforcer and John Paul’s right hand suggested anything but passivity — but neither did church watchers expect surprises.

They generally believed that he would sustain John Paul II’s conservative line on morality and church discipline and focus most of his energies on trimming the Vatican bureaucracy and battling Western culture’s «moral relativism.»

Although acknowledged as a brilliant conservative theologian, Benedict lacked the open-armed charisma of his predecessor. … …. But this year he has emerged as a far more compelling and complex figure than anyone had imagined. And much of that has to do with his willingness to take on what some people feel is today’s equivalent of the communist scourge — the threat of Islamic violence. … …

But by speaking out last September in Regensburg, Germany, about the possible intrinsic connection between Islam and violence and refusing to retract its essence … the pontiff suddenly became a lot more interesting.

In one imperfect but powerful stroke, he departed from his predecessor’s largely benign approach to Islam, discovered an issue that might attract even the most religiously jaded and managed (for better or worse) to reanimate the clash-of-civilizations discussion by focusing scrutiny on the core question of whether Islam, as a religion, sanctions violence.