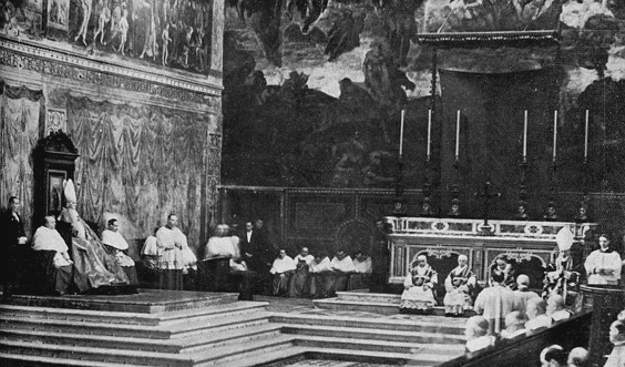 The Cardinal Penitentiary who officiates this day, the Deacon and Subdeacon, enter in black garments, without censer or lights, to express the darkness spread over the earth by the death of the Creator. The Pope, habited as at the Tenebrae preceded by the Cross, without his ring, without giving his blessing, enter the Chapel, deposits his mitre and says a short prayer.

The Cardinal celebrant prays at the altar which, being stripped, is emblematic of the nakedness of the Redeemer on the Cross. A chanter sings the prophecy of Hosea; the Tract follows; the Penitentiary reads the prayer; the Deacon sings flectamus genua, the subdeacon Levate and reads a lesson form the book of Exodus. Three chanters sing the Passion according to St. John, the only Apostle who followed his master to the Cross. At the word “inclinato capite emisit spiritum” the Pontiff and all assistants kneel: the Deacon then lays aside the folded chasuble, puts on the stole as a mark of penance, and without asking the blessing, or carrying either lights or incense, he reads the end of the Passion in the ordinary tone of the Gospel.

A sermon is then preached … … (after the sermon) the celebrant laying aside the chasuble receives from a deacon a Cross covered with a black veil which is removed by degrees, and presenting it to the assistants says: “Ecce lignum crucis”. The Tenors answer “In quo salus” and the whole choir “Venite adoremus” when all prostrate themselves except the celebrant who, advancing to the Gospel side of the altar uncovers the right arm of the Cross, repeating in a louder voice “Ecce lignum crucis,” the choir responding as before. At the centre of the altar he uncovers it in full, saying in a still louder tone, “Ecce lignum crucis”; the same response being made for the last time; it is then carried to the steps of the altar, the Pope and all present kneeling.

When the Pontiff has resumed his seat, his shoes are taken off, the cope and mitre are laid aside; and following by the assistant Bishops he prays before the Cross, and orders his attendant knight to depose his offering which is brought in a purse of red damask silk fringed with gold. .. …