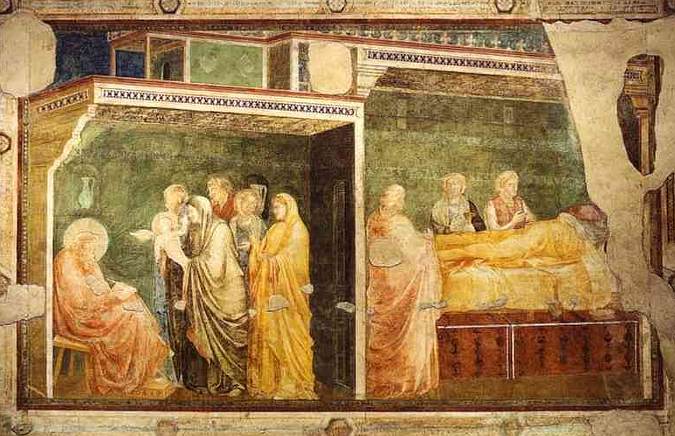 Om Giottos bilder i Peruzzi-kapellet kan vi lese:
The construction of the Peruzzi Chapel, the second chapel of the right-hand transept, was made possible by the influential banker, Donato di Arnoldo Peruzzi, who left additional money for this memorial chapel in his will in 1299. It was probably his grandson Giovanni di Rinieri Peruzzi who donated the murals honoring John the Evangelist and John the Baptist, which were the first works created by Giotto in Santa Croce.

The juxtaposition of the two John cycles is unusual, and researchers believe it contains a mixture of religious and secular iconography: John the Evangelist was the donor’s name-saint; John the Baptist was patron saint both of the city of Florence and of St. Francis, to whom Santa Croce is dedicated. In his family’s memorial chapel the banker Peruzzi, therefore, has realized a program which connects his own memory and that of his family with the religious background of the Franciscans and the fate of the city, in which the Peruzzis were one of the most influential families.