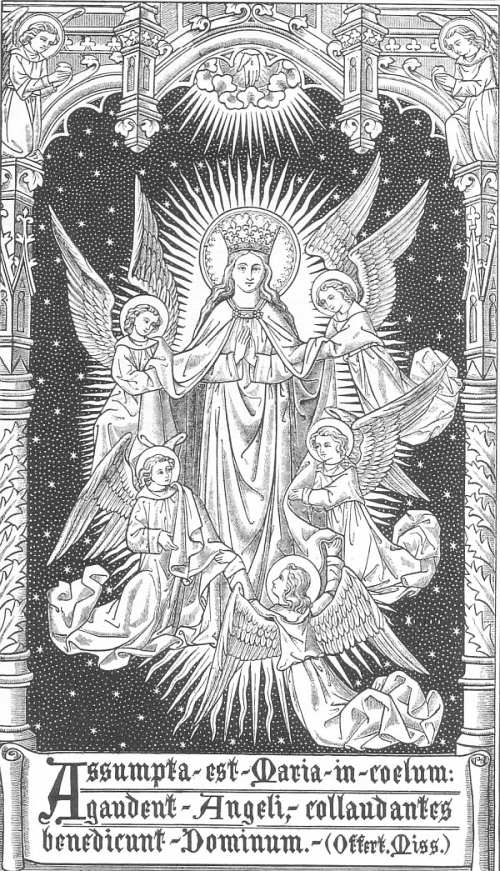 During Wednesday’s general audience in Castel Gandolfo, Pope Benedict XVI spoke of there being a “nexus” between the Blessed Virgin Mary and the priesthood. Like St. John, he said, all priests “are called to accept her into their home.”

Pope Benedict pointed out that this nexus is rooted in the mystery of the Incarnation. “God does not act against our freedom,” he explained. “He needed the yes of his creatures.”

“St. Bernard of Clairvaux, in one of his homilies, explained in dramatic manner this decisive moment of universal history, when heaven, earth and God Himself await this creature’s response,” he added.

“Mary is truly and profoundly involved in the mystery of the Incarnation, of our salvation. … Sacrifice, the priesthood and the Incarnation go together and Mary is at the heart of this mystery,” the Pontiff said.

Pope Benedict also reflected on the tie between priests and Mary. From the cross, Jesus sees his mother and the beloved apostle, an important individual, but more importantly a prefigurement of loved people and especially all priests.

“The Second Vatican Council invites priests to see Mary as the perfect model of their existence,” the Pope added. “The Curé d’Ars, who we think of this year especially, loved to repeat that after Jesus Christ gave us everything he could give, he wanted to make us heirs of what was most precious to him, his holy mother,” the Pope continued. “This applies to all Christians, but especially for priests.”

“Every priest can and should truly feel himself to be the son of this most holy and most humble mother,” he said. The Holy Father concluded by expressing his closeness to the people of Taiwan, China, Philippines and Japan, who were recently hit by a typhoon. “I call on everyone to pray for them and for those who lost their lives. I hope that the relief of solidarity and the help of material aid will not be lacking.” 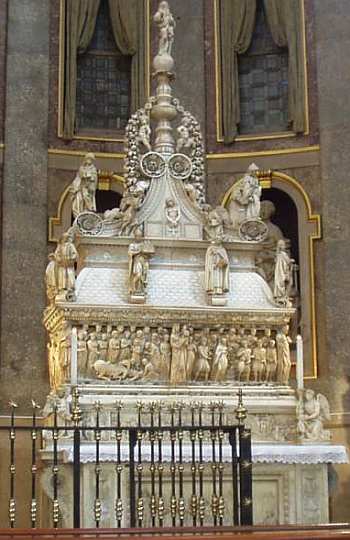 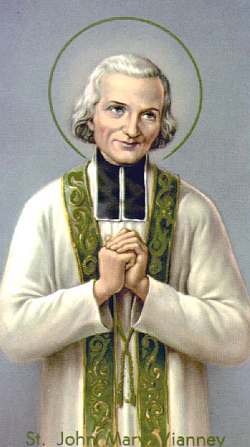 He believes that the old rite is vastly superior to the Novus Ordo, indeed that the NO represents a radical breach in liturgical tradition, but at the same time is convinced that many so-called traditionalists are as much children of Vatican II, and of the Enlightenment, as the liberals are. There is something about them, he contends, that is schismatic, even Protestant; perhaps even modernist. They are rebels.

Kozinski is not thinking here principally of Lefebvrists or sedevacantists, but of what we might call the far liturgical right in the mainstream Church, the people you sometimes find in the LMS and the FSSP and in parishes where the old rite is said regularly. Thaddeus calls these people “Gnostic traditionalists”, and by Gnosticism he means “the attitude that leads one to believe he possesses an irrefutable insight into the truth of matters of great importance, whether natural or supernatural”.

For some years, according to his account in the New Oxford Review, Kozinski attended nothing but indult Masses in the old rite. Then, two or three years ago, he moved with his young family to an area where such Masses were not available, and he was therefore obliged to attend the Novus Ordo again.

As he became familiar with his new surroundings – and found rich spiritual fruit in the new rite as celebrated by the Oblates of St Joseph – he saw that in his former unyielding traditionalism he had developed what he calls “an ideological and neurotic consciousness of being a ‘traditionalist’ “.

Kozinski believes that “traditionalism” can become an ideology that makes one spiritually sick, “as one becomes more attached to the traditionalist movement, its narratives, personages, publications, polemics, criticisms, etc than to the Church as a whole – and to Christ Himself”. This ideology, he says, can manifest itself in paranoia, judgment, harshness, Jansenism, and lack of meekness.

That’s me all right, but Kozinski clearly does not want to condemn all traditionalists, and I feel I should speak up here for the thousands of hardcore trads who are not at all Jansenist or harsh but are decent, well-balanced human beings. Among them I would include the Lefebvrist godfather of my youngest son.

END_OF_DOCUMENT_TOKEN_TO_BE_REPLACED 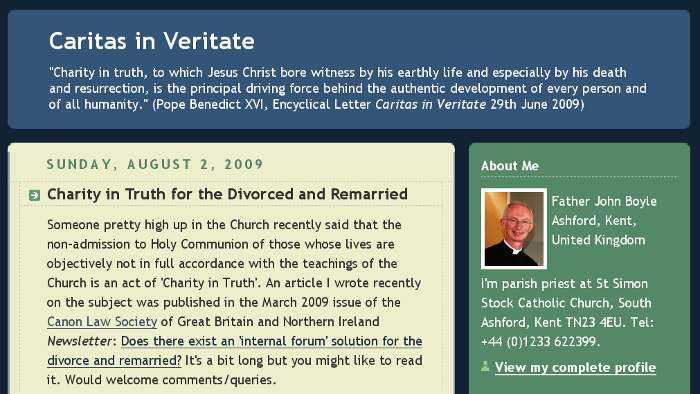 Firstly: The words at the top of this blog (Caritas in Veritate) summarise all that motivates me as a priest and as a human being. I may myself be far from a perfect example of an authentically developed person, but this project is one for a lifetime. …

Secondly: many people have expressed regret that I had pulled out of the blogosphere. They were very kind and charitable. I believe they spoke sincerely and truthfully.

Thirdly: I was at Father Finigan’s happy Silver Jubilee celebrations last Tuesday. It was of course a wonderful celebration for the parish and by the parish. … But it also brought many who communicate through the blogosphere together, those who write their own blogs or comment on blogs. It’s a good community and provides great mutual support. I want to be part of that, to both receive and contribute.

It is now not at all uncommon for pastors to have within their flocks Catholics 1) who are in irregular marital situations following the breakdown of a previous marriage, or 2) who have married outside the Church in ignorance of the Church’s law concerning Canonical Form, or 3) who are simply living together without getting married or who, for some reason, have married civilly but are not prepared to marry ecclesiastically.

The situation of the second group above can be remedied with relative ease provided there is no impediment. They should be offered the possibility of convalidation or, where this would not be possible, sanation. They could then be re-admitted to the sacraments. People in the third group may not be admitted to Holy Communion until they marry according to the law of the Church.

This paper has dwelt on the situation of those in the first group. Given the repeated and consistent teaching of the Church’s magisterium on this matter, it can only be a matter of great surprise, and even of grave concern, that there are still some clergy who consider the so-called ‘internal forum solution’ as an option. Those who are divorced and remarried, if they are unable to separate for a just reason, must either agree to the ‘brother and sister’ solution and have recourse to the sacraments remoto scandalo (i.e. ensuring that all possibility of scandal has been removed e.g. by receiving Communion in a place where their condition as divorced and remarried is not known), or submit their previous union to the ecclesiastical tribunal for a judgement as to the nullity or otherwise of that union, before validation of their current union and eventual re-admittance to the sacraments. 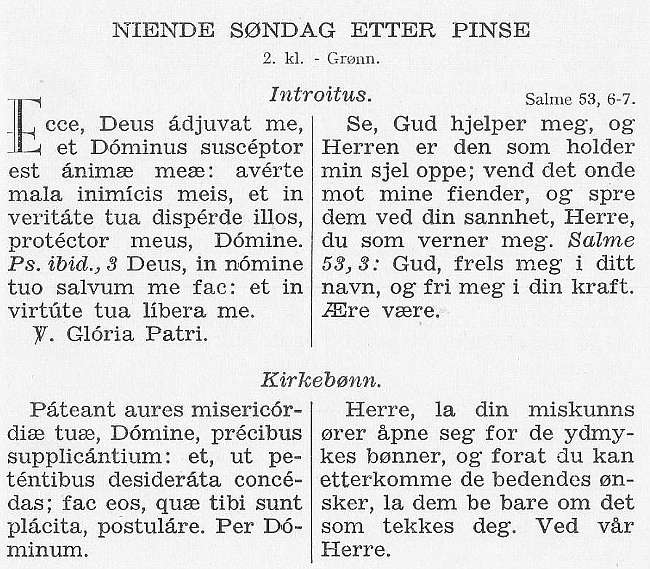 Tidligere erkebiskop i Toledo, Spania, kardinal Antonio Cañizares Lloverais er leder av vatikanets liturgikongregasjon og har myndighet over hvordan messen blir feiret rundt om i verden. With the help of a translator, the Cardinal kindly consented to speak with LifeSiteNews.com (LSN) on July 24th at the offices of the Congregation on the Via della Conciliazione in Rome, down the road from St. Peter’s Basilica and the Apostolic Palace.

Cardinal Canizares Llovera: There is no doubt about the connection.

LSN: We know that over the years a great many people have seen and complained about abuses of the liturgy at Mass. What can the faithful do when they see these?

Cardinal Canizares Llovera: They should say to the priest immediately after Mass as a part of fraternal correction. If it is not possible, they should say to the bishop. If the bishop does not act, they should come here and report it to the Congregation.
There are two documents that are important. One by the Cong. for Divine Worship, Redemptionis Sacramentum, that talks about some of these abuses and talks about the rights of the faithful and how they should act.
The other is Sacramentum Caritatis, of Benedict XVI that also gives criteria on the way that the Eucharist is abused.
We should all fight to avoid abuses against the Eucharist. It is the holiest, greatest, most important [thing] in the Church and in life. We should respect the Eucharist and the rules and discipline of the Church that give the warranty of ecclesial communion that has its sources, its roots, its truth in the Eucharist, in the celebration of the Eucharist, in the rite that the Church has indicated.

LSN: Is the liturgical revolution over? Is the Church in general becoming more balanced about the liturgy?