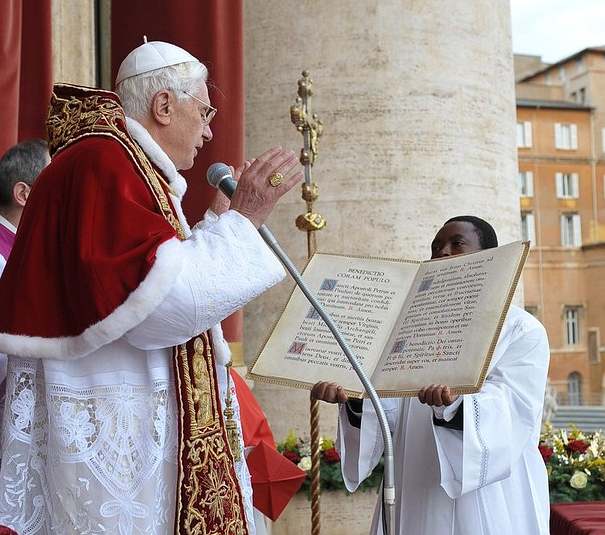 The liturgy of the Mass at Dawn reminded us that the night is now past, the day has begun; the light radiating from the cave of Bethlehem shines upon us.

The Bible and the Liturgy do not, however, speak to us about a natural light, but a different, special light, which is somehow directed to and focused upon “us”, the same “us” for whom the Child of Bethlehem “is born”. This “us” is the Church, the great universal family of those who believe in Christ, who have awaited in hope the new birth of the Saviour, and who today celebrate in mystery the perennial significance of this event.

At first, beside the manger in Bethlehem, that “us” was almost imperceptible to human eyes. As the Gospel of Saint Luke recounts, it included, in addition to Mary and Joseph, a few lowly shepherds who came to the cave after hearing the message of the Angels. The light of that first Christmas was like a fire kindled in the night. All about there was darkness, while in the cave there shone the true light “that enlightens every man” (Jn 1:9). And yet all this took place in simplicity and hiddenness, in the way that God works in all of salvation history. God loves to light little lights, so as then to illuminate vast spaces. Truth, and Love, which are its content, are kindled wherever the light is welcomed; they then radiate in concentric circles, as if by contact, in the hearts and minds of all those who, by opening themselves freely to its splendour, themselves become sources of light. Such is the history of the Church: she began her journey in the lowly cave of Bethlehem, and down the centuries she has become a People and a source of light for humanity. Today too, in those who encounter that Child, God still kindles fires in the night of the world, calling men and women everywhere to acknowledge in Jesus the “sign” of his saving and liberating presence and to extend the “us” of those who believe in Christ to the whole of mankind.

Wherever there is an “us” which welcomes God’s love, there the light of Christ shines forth, even in the most difficult situations. The Church, like the Virgin Mary, offers the world Jesus, the Son, whom she herself has received as a gift, the One who came to set mankind free from the slavery of sin. Like Mary, the Church does not fear, for that Child is her strength. But she does not keep him for herself: she offers him to all those who seek him with a sincere heart, to the earth’s lowly and afflicted, to the victims of violence, and to all who yearn for peace. Today too, on behalf of a human family profoundly affected by a grave financial crisis, yet even more by a moral crisis, and by the painful wounds of wars and conflicts, the Church, in faithful solidarity with mankind, repeats with the shepherds: “Let us go to Bethlehem” (Lk 2:15), for there we shall find our hope.

The “us” of the Church is alive in the place where Jesus was born, in the Holy Land, inviting its people to abandon every logic of violence and vengeance, and to engage with renewed vigour and generosity in the process which leads to peaceful coexistence. The “us” of the Church is present in the other countries of the Middle East. How can we forget the troubled situation in Iraq and the “little flock” of Christians which lives in the region? At times it is subject to violence and injustice, but it remains determined to make its own contribution to the building of a society opposed to the logic of conflict and the rejection of one’s neighbour. The “us” of the Church is active in Sri Lanka, in the Korean peninsula and in the Philippines, as well as in the other countries of Asia, as a leaven of reconciliation and peace. On the continent of Africa she does not cease to lift her voice to God, imploring an end to every injustice in the Democratic Republic of Congo; she invites the citizens of Guinea and Niger to respect for the rights of every person and to dialogue; she begs those of Madagascar to overcome their internal divisions and to be mutually accepting; and she reminds all men and women that they are called to hope, despite the tragedies, trials and difficulties which still afflict them. In Europe and North America, the “us” of the Church urges people to leave behind the selfish and technicist mentality, to advance the common good and to show respect for the persons who are most defenceless, starting with the unborn. In Honduras she is assisting in process of rebuilding institutions; throughout Latin America, the “us” of the Church is a source of identity, a fullness of truth and of charity which no ideology can replace, a summons to respect for the inalienable rights of each person and his or her integral development, a proclamation of justice and fraternity, a source of unity.

In fidelity to the mandate of her Founder, the Church shows solidarity with the victims of natural disasters and poverty, even within opulent societies. In the face of the exodus of all those who migrate from their homelands and are driven away by hunger, intolerance or environmental degradation, the Church is a presence calling others to an attitude of acceptance and welcome. In a word, the Church everywhere proclaims the Gospel of Christ, despite persecutions, discriminations, attacks and at times hostile indifference. These, in fact, enable her to share the lot of her Master and Lord.

Dear Brothers and Sisters, how great a gift it is to be part of a communion which is open to everyone! It is the communion of the Most Holy Trinity, from whose heart Emmanuel, Jesus, “God with us”, came into the world. Like the shepherds of Bethlehem, let us contemplate, filled with wonder and gratitude, this mystery of love and light! Happy Christmas to all!