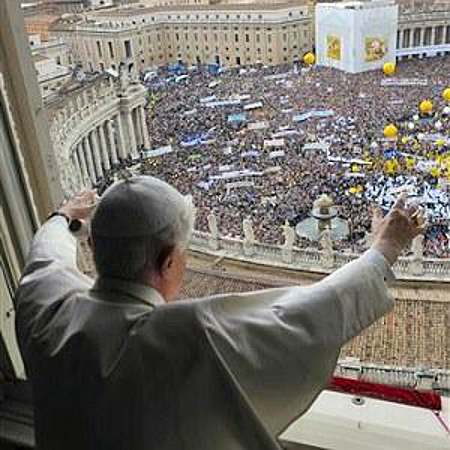 A crowd of 150,000 filled St Peter’s Square on Sunday to support Pope Benedict XVI in the midst of the clerical sex abuse scandal. The Pope said that he appreciated this “beautiful and spontaneous show of faith and solidarity” and again denounced what he called the “sin” that has infected the church and needs to be purified, a theme in his addresses which has become stronger in recent weeks.

Despite grey skies and drizzle, the crowd, mostly Italians, were enthusiastic as they gathered for the Pope’s Sunday Angelus. Banners in Bernini’s colonnade read “Together with the pope,” and “Don’t be afraid, Jesus won out over evil.”

According to Associated Press, the crowd interrupted Benedict frequently with applause and shouts of “Benedetto!” and the pontiff himself strayed from his prepared remarks to thank them again and again.