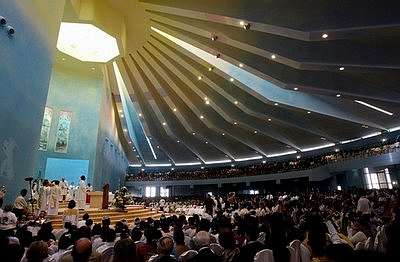 Situated on land donated by the emir — yet without any crosses or campanile marking its exterior — the church of the Our Lady of the Rosary was inaugurated in a five-hour Mass celebrated by Cardinal Ivan Dias, who served as papal legate.

As the Indian cardinal presented a relic of St Pio of Pietrelcina as a gift to the community, wire reports noted that some among the congregation wept.

The Mass was conducted in English, but prayers were also said in Arabic, Urdu, Hindi, Tagalog, Spanish and French for the many nationalities that would worship in the church.

Dozens of police were deployed around the church, which cost some $20 million, and female officers searched the handbags of women worshippers.

Western embassies, particularly from the United States and Britain, warned nationals living in Qatar to be extra vigilant after an Islamic militants on the Internet made threats linked to the opening of the church.

The papal nuncio in the Gulf, Archbishop Paul-Munjed al-Hashem, said on the sidelines of the Doha Mass that talks had begun with Riyadh to convince it to become the next Gulf Arab state to allow churches.