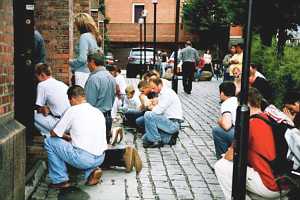 I would say that the first requirement for all of us is to let the Lord take care of the part we cannot do. Today we heard in the Gospel the parable of the faithful servant (Mt 24.42-51). This servant, the Lord tells us, gives food to others at the appropriate time. He does not do everything all at once, because he is wise and prudent and knows how to distribute what is necessary at different times. He does so humbly, confident of his master’s trust.

So also we must do what we can to be wise and prudent and to have trust in the goodness of our Master, of the Lord, because ultimately, it is He who guides His Church. We assert ourselves with the small gifts we have and do what we can, above all, those duties that are always necessary: the Sacraments, announcing the Gospel, showing our charity and love.

As for the interior life that you referred to, it is necessary to our service as priests. The time which we reserve for prayer is not time taken away form our pastoral responsibilities but it is pastoral ‘work’ in itself to be able to pray for others.

In the Common for Pastors, we read that the Good Shepherd is characterized by ‘multum oravit pro fratribus,’ praying a lot for our brothers. This is what a pastor must be, a man of prayer who goes before the Lord to pray for others, doing so, as well, in place of others wh do not know how to pray or who do not wish to pray or who do not find the time to pray. What could be better evidence that a dialog with God is pastoral work!

John Allen har skrevet grundig om årets møte, både for en uke siden og denne helgen. Allen skriver at pave Benedikt ikke har tenkt å skrive noe autoriativt om dette emnet. Yet it’s equally clear that the Schülerkreis session this weekend is not just a busman’s holiday. Benedict sees the philosophical currents unleashed by Darwin as a matter of no little import, and one can expect the issue of creation and evolution to be an important theme in this pontificate. …

Ultimately, however, he sees this as a debate for scientists to resolve. His concern cuts deeper, to the modern tendency to convert evolution into “a universal theory concerning all reality” that excludes God, and therefore rationality, as the basis of existence. In contrast, Benedict insists upon the fundamental conviction of Christian faith: “In principio erat Verbum – at the beginning of all things stands the creative power of reason.” Benedict is clear this is a question which “can no longer be decided by arguments from natural science.”

The new rules tighten admission policies and explicitly ban any applicant who has been involved in the sexual abuse of a minor or shows evidence of a sexual attraction to children.

According to the new guidelines, “thresholds pertaining to sexuality serve as the foundation for living a lifelong commitment to healthy, chaste celibacy. As we have recently seen so dramatically in the church, when such foundations are lacking in priests, the consequent suffering and scandals are devastating.”

Responding to the first question on the situation of the Church, posed by an 83-year-old priest, the Pope said that they should not to allow themselves to be discouraged. He stressed that the Church is alive. The Holy Father mentioned some examples of great threats that the Church faced in the past, such as the Muslim invasions, the Enlightenment, Marxism, and Hitler, who said that he was convinced “that he would finally be able to destroy Catholicism.”

“We have 2,000 years of Church history, with so many sufferings, including many failures,” the Bishop of Rome said, but “on the other hand we see how the Church has revived after so many crises with a new youth, with new freshness.” In particular, Benedict XVI referred to the flourishing vocations in Africa, saying they are a significant and concrete hope.

In the second question, the Pope addressed the need for evangelization, stressing responsibility in preparation for the sacraments, particularly marriage, as well as pastoral care of the divorced who have remarried.