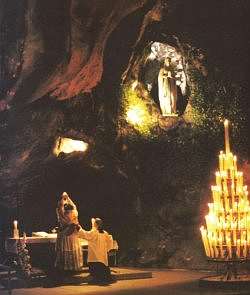 We have witnessed different reactions among bishops, groups of bishops or individuals who have publicly commented on this fundamental new law of the Church. Some of these reactions have been very positive and encouraging, others have been restrictive and erroneous. I am not surprised at this problematic interpretation; many of us predicted that the implementation of the Apostolic Letter, Summorum Pontificum of 7 July 2007 was not going to be easy.

The baptism was a “deliberate and provocative act…made into a triumphalist tool for scoring points.” … “A new provocation for the Islamic world.” … “I cannot understand the Vatican’s motivation. Why with preparations for dialogue underway…would the pope revive antagonism this way.” … “What amazes me is the high profile the Vatican has given this conversion. Why couldn’t he have done this in his local parish?” … “The problem lies in the vindictive atmosphere surrounding the conversion ceremony.” [Palestinian journalist]

“This kind of incredibly defensive posture underscores the need for Muslims to embrace religious liberty. People convert from Catholicism, Protestantism and Judaism every day, and no one blinks an eye.

In any event, kudos to the Jerusalem Post for its analysis: ‘Allam was not a practicing Muslim, was educated in a Catholic school as a teenager, has been married for years to an Italian Catholic, and credits Pope Benedict for having influenced his decision…[and] he has been living under police protection for years, primarily because of his criticism of Islamic terrorism …

a) I said that it was just and necessary to create a space proper for the liturgy of the Word (around the ambo) and to accomplish it in the form of a proclamation and a response, as a dialogue between those who announce this Word (the lector, the cantor, the deacon, the priest) and those who hear it.

b) I observed moreover that in churches (especially cathedrals and monasteries) in which the main altar is too far from the people, it was good to build altars that could be placed closer to the people.

c) I added, lastly, that the great tradition of “orientation,” the act of turning toward the “Orient” as the image of the return of Christ, in no way requires that all altars must once again be reversed and that the priest’s place be changed as a consequence. On the contrary, one can satisfy the internal requirements of this apostolic tradition without undertaking great external transformations, END_OF_DOCUMENT_TOKEN_TO_BE_REPLACED

I think we have established that in many respects we are actually in agreement. So I think the main topic at this point is regarding the prudence of this specific act: was it the wisest and most prudent path for Benedict to baptize this particular Muslim on Easter at St. Peter’s … my answer is Yes. So let me address this specific topic instead of trading in hypotheticals, which is what we have been doing until now.

1) It was wise because this man has been thinking about converting for years. …

2) It is right because the man lives in Rome. Benedict is the bishop of Rome and thus the senior or chief pastor of that city … .

3) Mr. Allam is already a public figure. He is a journalist and knows how to deal with publicity and questions about his motives and positions. …

4) It is good because it is a claim of solidarity with (converts in Muslim countries) by the pope. …

Yesterday evening I converted to the Christian Catholic religion, renouncing my previous Islamic faith. Thus, I finally saw the light, by divine grace — the healthy fruit of a long, matured gestation, lived in suffering and joy, together with intimate reflection and conscious and manifest expression. I am especially grateful to his holiness Pope Benedict XVI, who imparted the sacraments of Christian initiation to me, baptism, confirmation and Eucharist, in the Basilica of St. Peter’s during the course of the solemn celebration of the Easter Vigil. And I took the simplest and most explicit Christian name: “Cristiano.” Since yesterday evening therefore my name is Magdi Cristiano Allam.

For me it is the most beautiful day of my life. To acquire the gift of the Christian faith during the commemoration of Christ’s resurrection by the hand of the Holy Father is, for a believer, an incomparable and inestimable privilege. At almost 56 END_OF_DOCUMENT_TOKEN_TO_BE_REPLACED 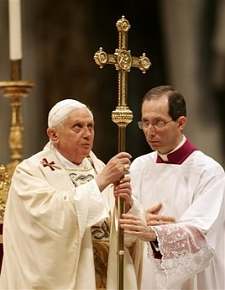 «The position of the Cross at the centre of the altar – says Marini – indicates the centrality of the Crucified in the eucharistic celebration and the precise interior orientation which the entire congregation is called to have during the eucharistic liturgy: one does not look at each other, but one looks to Him who has been born, has died and is risen for us, the Saviour. From the Lord comes the salvation, He is the Orient, the Sun which rises to whom we all must turn our gaze, from Whom we all must receive the gift of grace. END_OF_DOCUMENT_TOKEN_TO_BE_REPLACED 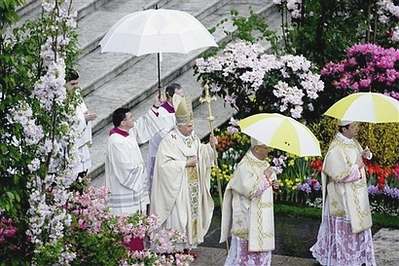 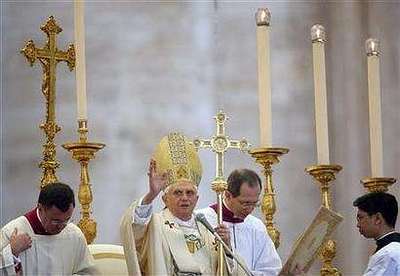 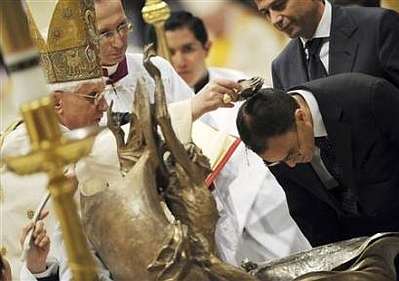 Magdi Allam, a columnist and vice-director of Corriere della Sera, Italy’s leading daily newspaper, is among seven new Catholics from five countries to be personally baptized by the pope during the Easter Vigil Mass in St. Peter’s Basilica.

Particularly in the wake of recent charges by terrorist mastermind Osama bin Laden that Benedict XVI is leading a “new crusade” against Islam, the reception of such a high-profile Muslim convert during the holiest period of the Christian year could further inflame Catholic/Muslim tensions.

A spokesperson for Italy’s Muslim community, Yahya Pallavicini, said that he «respects the free choice» made by Allam, but voiced «perplexity» about the timing and the decision to receive Allam in a place «of such great symbolic importance.»

On the other hand, the choice to baptize Allam during the Easter vigil could also be read as a sign of determination from Benedict, that he will not be intimidated by implied threats such as those voiced in bin Laden’s recent audiotape. 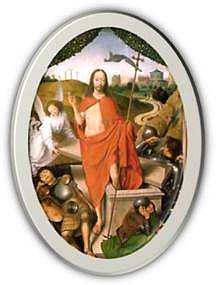 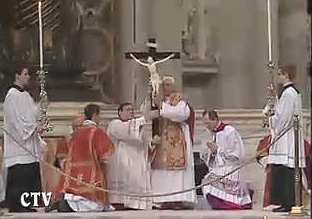 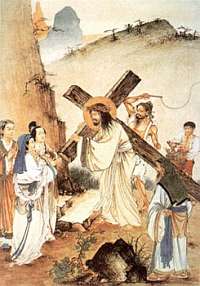 In his meditation for the 14th, and last, station — «Jesus is placed in the tomb» — the cardinal recalled the long wait between Jesus’ burial and his resurrection three days later. Even his strongest disciples grew weary in waiting, he wrote.

He asked, «Are we not right in being in a hurry» and wanting to see an immediate victory of Christ over evil?

Cardinal Zen said perhaps «it is our victory we are eager to witness» and prayed for perseverance and patience, reminding the faithful that God promised to be with his children to the end of time.

By «evangelical Catholicism» I don’t have in mind primarily Catholic adaptation of styles of belief and worship associated with evangelical Protestantism, such as high-octane praise and worship or a strong personal relationship with Jesus. Neither am I talking about the root sense of «evangelical» as a radical witness to the values of the gospel, though both in a sense are part of the picture.

Instead, what I’m trying to describe is the most powerful current at the policy-setting level of the church, as well as a dynamic constituency at the Catholic grassroots. It pivots on three points:

* A strong reaffirmation of traditional markers of Catholic belief, language and practice. Examples include the revitalization of the pre-Vatican II Latin Mass, reassertion that Catholicism alone possesses the fullness of what it means to be «church,» and rejection of theological tendencies that would put Christ on the same level as other saving figures;
* Bold public assertion of those markers of identity;
* Personal embrace of those markers of identity, as opposed to simply imbibing them from traditional Catholic cultures, neighborhoods and families.

Defined this way, «evangelical Catholicism» can be understood as a response to secularism and what Benedict XVI calls the «dictatorship of relativism,» protecting the church against assimilation by emphasizing what makes Catholicism distinct.

I had originally referred to this mega-trend as the «Catholic identity movement,» but that drew fire from liberal Catholics who argued that reaffirming traditional belief and devotion, such as the Latin Mass, is not the only way to articulate a strong Catholic identity. Since I’m trying to describe this movement, not to pass judgment on it, I went back to the drawing board in search of a more neutral nomenclature. In the end, I settled on «evangelical Catholicism» because it captures the sense of a public assertion of traditional Catholic identity in the context of a highly pluralistic, secular culture. 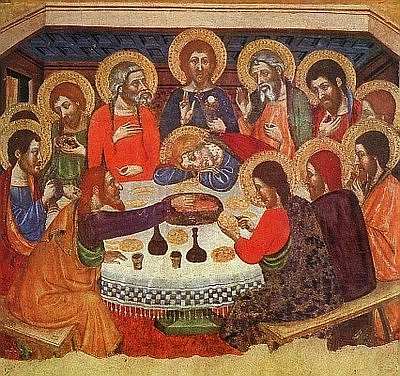