Benedict XVI’s closest collaborator is denying media rumors that the Pontiff is working to gradually «undo» the changes implemented after the Second Vatican Council.

Cardinal Tarcisio Bertone, the Pope’s secretary of state, stated this in an interview with L’Osservatore Romano published Thursday.

He addressed the debate surrounding false rumors in the Italian media about supposed documents that would reverse changes in the Church since Vatican II, especially regarding the liturgy.

The cardinal asserted that in order to understand the Holy Father’s intentions and actions, it is necessary to consider his personal history, one that included involvement «as a genuine protagonist» in the Conciliar Church.

These other rumors about «presumed documents of reversal are pure inventions,» he stated.

The cardinal highlighted some applications of the Second Vatican Council that the Pope has «promoted constantly with intelligence and depth of thought.» …

This morning’s mail brought a package from a good friend in Stockholm: The newly published Missale Parvum. Although not as extravagant as some of the new Missals seen in recent years, the appearance of this Latinsk-Svensk Missal is in many ways far more significant as it is the first Swedish language edition of the 1962 Missal to be published in more than forty years and is arguably the first to bear the imprimatur of a Swedish bishop in centuries. Publication of the new Missal was prompted by the growing number of traditional Catholics in the country who were highly instrumental in bringing it about. … …

The majority of the roughly 200,000 Catholics in present-day Sweden belong to non-Swedish ethnic groups with Poles being the largest of these, followed by Croats and Hispanics. Interestingly it is ethnic Swedes, most of whom are converts from Swedish Protestantism, who form the bulk of the traditional Catholic community. How things will develop from here will be worth keeping an eye on. The Church which had once almost completely disappeared from Sweden is now returning to, what is in some ways, a clean slate. Swedes in general did not suffer from the post-conciliar tumult that ravaged the Catholic world in the late 20th century largely because the Church was only marginally present among, or accessible to the Swedish people during most of that period. Today’s emerging convert population has a choice between two rites of equal footing. … … The Vatican has proposed sweeping reforms to the way Mass is celebrated, it has been claimed.

Communion on the tongue, Consecration celebrated ad orientem (facing east) and renewed use of Latin could all be re-introduced to ordinary Sunday Masses as part of proposals put forward by the Congregation for Divine Worship.

Andrea Tornielli, a senior Vatican watcher, reported last week that the congregation’s cardinals and bishops voted «almost unanimously in favour of greater sacrality of the Rite» at a plenary meeting in March.

Members of the congregation are said to have put forward 30 propositiones («propositions») aimed at reforming the way in which the Novus Ordo has been celebrated since the Second Vatican Council.

En Una Voce gruppe i Iowa, USA, har laget fire plakater for å reklamere for den tradisjonelle latinske messen – og jeg syns de har gjort godt arbeid. De skriver også påp hver av plakatene: «Mystery. Attraction. Sacrifice. These are the elements which comprise a great love story. In fact these are the features of the greatest love story ever told: God’s intense, relentless love for humanity. This ancient love of Christ made present to saints like Thomas Aquinas, Theresa of Avila, Francis of Assisi, Catherine of Sienna, Ignatius of Loyola, is presented anew today in the Extraordinary Form of the Holy Sacrifice of the Mass, often called the Traditional Latin Mass. Come and experience the heritage, reverence and mystery which captivated the saints through out history. Come receive the ever ancient, ever new love God is offering you in the majestically transcendent Extraordinary Form of the Roman Rite. 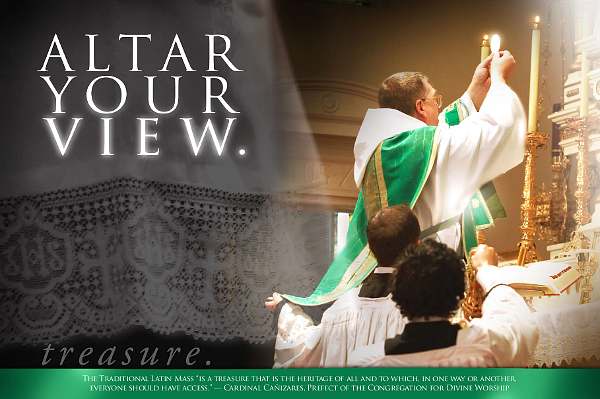 TREASURE
The Traditional Latin Mass “is a treasure that is the heritage of all and to which, in one way or another, everyone should have access.” — Cardinal Cañizares, Prefect of the Congregation for Divine Worship 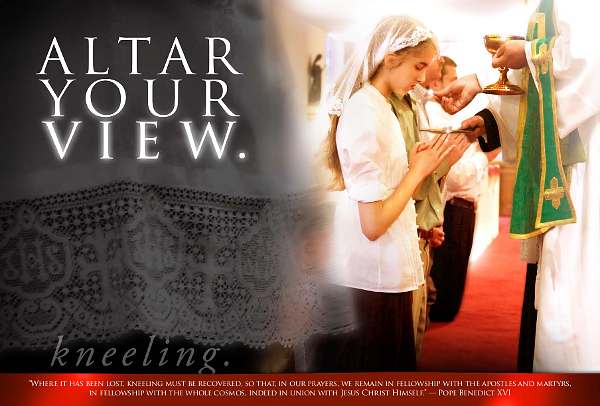 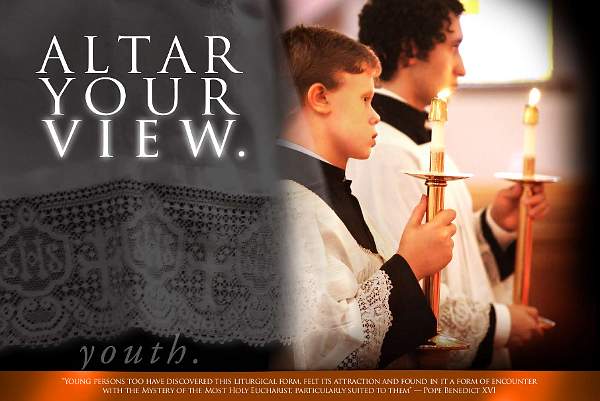 YOUNG
«Young persons too have discovered this liturgical form, felt its attraction and found in it a form of encounter with the Mystery of the Most Holy Eucharist, particularly suited to them” — Pope Benedict XVI 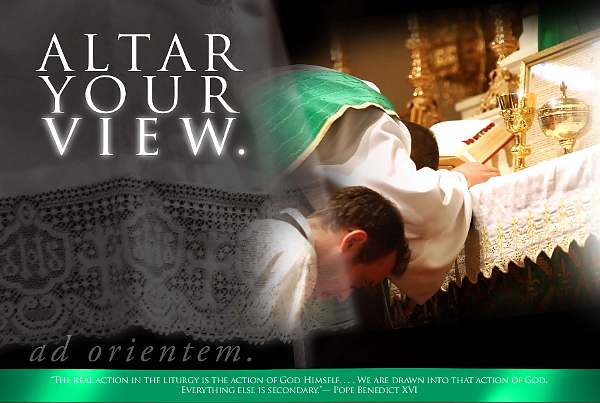 AD ORIENTEM
“The real action in the liturgy is the action of God Himself. . . . We are drawn into that action of God. Everything else is secondary.”— Pope Benedict XVI

SE PLAKATENE I STØRRE UTGAVE HER.

Takk for tre år i Stavanger

12. mars i år var det stort plenumsmøte i vatikanets liturgikongregasjon, der temaet var hvordan skal lirugien/ messen i enda større grad enn nå vise at Guds folk her møter Guds hellighet:
The Cardinals and Bishops members of the Congregation voted almost unanimously in favor of a greater sacrality of the rite, of the recovery of the sense of eucharistic worship, of the recovery of the Latin language in the celebration, and of the remaking of the introductory parts of the Missal in order to put a stop to abuses, wild experimentations, and inappropriate creativity. They have also declared themselves favorable to reaffirm that the usual way of receiving Communion according to the norms is not on the hand, but in the mouth. … … The «Liturgy Minister» of Pope Ratzinger, Cañizares, is also having studies made on the possibility to recover the orientation towards the Orient of the celebrant, at least at the moment of the eucharistic consecration … … 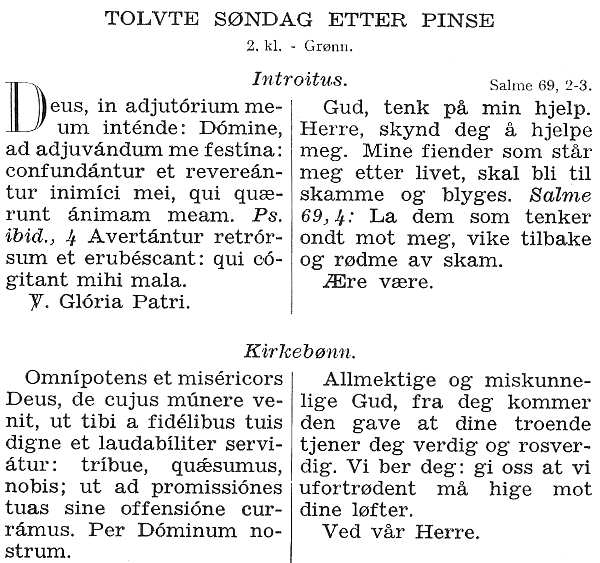 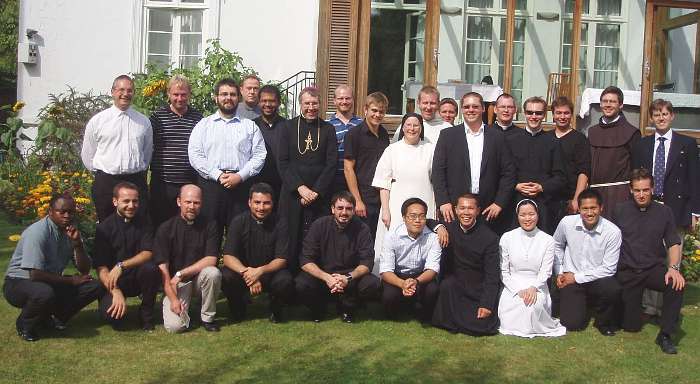 På Zenit leser vi i dag at Vatikanet i løpet av dette året for prester is aiming to prepare a «brief, forceful and very clear» document on the formation of seminarians as one of the elements to close the Year for Priests.

This was affirmed by Archbishop Jean-Louis Bruguès, secretary of the Congregation for Catholic Education, in an interview with L’Osservatore Romano today.

The archbishop explained that the preparation of the document over upcoming months will imply a meeting of the congregation’s permanent commission, made up of members of various dicasteries who deal with the formation of future priests.

The congregation, the prelate added, wants to send a message to priests that they have been «chosen, [the priesthood] is an honor. Be happy to be a priest.»

It is on the subject of the liturgical reform that we start our conversation with the Maestro, with Domenico Bartolucci, who in liturgical and musical matters has been at ease working and giving counsel to five popes and who is a friend and collaborator of Benedict XVI, whose work he says is “an immense gift to the Church, if only they would let it work”.

Maestro, the recent publication of the Motu proprio “Summorum Pontificum” has brought a gust of fresh air into the desolate liturgical panorama which surrounds it. Even you may now celebrate the Mass of all time (“messa di sempre”.)

To tell the truth, I have always and without interruption celebrated it since my ordination … on the contrary, I sometimes found it difficult to celebrate according to the modern rite, even if I never said so.

The Mass which never was abolished, is it not?

Those are the words of the Holy Father even if some people pretend not to understand and even if many in the past have argued that the opposite is true.

Maestro, you have to admit to those who are denigrating the old Mass that it is not a Mass open to participation.

So that you won’t think that I’m just saying anything, I know how participation in old times was like, both in Rome, in the (St. Peter’s) Basilica and outside it, for instance down here in Mugello, in this parish, in this beautiful countryside, which was then populated by people strong in faith and full of piety. During Sunday Vespers the priest could just start singing “Deus in adiutorium meum intende” and thereafter fall asleep on his seat to wake up only at the “chapter”, the peasants would have continued alone and the heads of the family would have intoned the antiphon!

Do we see a veiled polemic, Maestro, in your confrontation with the current liturgical style?

I do not know, if you have ever been at a funeral and witnessed those “hallelujahs”, hand-clapping, giggly phrases, etc. One really asks oneself if these people have ever read the Gospel. Our Lord himself cried over Lazarus and his death. Here now, with this oily sentimentalism, nothing is respected, not even the suffering of a mother. I would like to show you how the people in old times participated in a Funeral Mass and how in the midst of that compunction and devotion, the magnificent and tremendous “Dies Irae” was intoned.

Was the reform not done by people who were conscious of what they were doing and well educated in the teachings of the Roman Church?

I beg your pardon, but the reform was done by arid people, arid, arid, I repeat it. And I knew them. As for the doctrine, Cardinal Ferdinando Antonelli himself, once said, I remember it well: “How come that we make liturgists who know nothing about theology?”

We agree with you, Monsignore, but is it not true that the people did not understand ….

Dearest friends, have you never read Saint Paul: “It is not important to know anything but what is necessary”, “it is necessary to love knowledge ad sobrietatem”. At this rate, after a few years people will pretend to understand “transubstantiation” in the same way as they explain a mathematical theorem. But just think of it that not even the priest may quite understand this mystery!

But how could it have come to this twisting of the liturgy?

It became a kind of fashion. Everybody talked about it, everybody “was renewing”, everybody was trying to be like popes (tutti pontificavano) in the wake of sentimentalism, of eagerness to reform. And the voices that raised themselves to defend the two thousand year old Tradition of the Church, were cleverly hushed. There was the invention of a kind of “people’s liturgy” …

Unfortunately this change had a number of unforeseen and largely negative effects. First of all, it was a serious rupture with the Church’s ancient tradition. Secondly, it can give the appearance that the priest and the people were engaged in a conversation about God, rather than the worship of God. Thirdly, it places an inordinate importance on the personality of the celebrant by placing him on a kind of liturgical stage.

Because the Mass is so necessary and fundamental to our Catholic experience, the liturgy is a constant topic in our conversation. That is why when we get together, we so often reflect upon the prayers and readings, discuss the homily, and – likely as not – argue about the music. The critical element in these conversations is an understanding that we Catholics worship the way we do because of what the Mass is: Christ’s sacrifice, offered under the sacramental signs of bread and wine.

If our conversation about the Mass is going to “make any sense,” then we have to grasp this essential truth: At Mass, Christ joins us to Himself as He offers Himself in sacrifice to the Father for the world’s redemption. We can offer ourselves like this in Him because we have become members of His Body by Baptism.

We also want to remember that all of the faithful offer the Eucharistic Sacrifice as members of Christ’s body. It’s incorrect to think that only the priest offers Mass. All the faithful share in the offering, even though the priest has a unique role. He stands “in the person of Christ,” the historic Head of the Mystical Body, so that, at Mass, it is the whole body of Christ – Head and members together that make the offering. 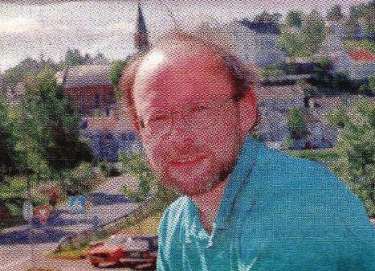