I Wadowice, pave Johannes Pauls fødested, pekte han på dåpspakten, hvor viktig det er for alle kristne å leve den ut. Han pekte også på hvor viktig det er at troen integreres i hele vårt liv, Allen skriver:
At its roots, Benedict believes, the modern malady is a crisis of faith – faith in Christ, in the church, and hence declining passion for the sacraments, for prayer, and for living a life of moral purpose. Hence what Benedict offers are usually the spiritual and pastoral basics, almost as if he wants to peel the modern situation back to the beginning of the divorce between faith and culture in the Enlightenment, and start again. Benedict is in that sense a man of the fundamentals. 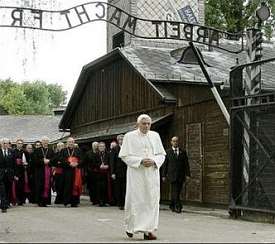 I sin faste spalte før besøket begynte nevnte Allen noen grunner til at paven ville besøke Polen:
The Poland trip is not just a wistful trip down memory lane, a kind of final tipping of the hat to Benedict’s boss and good friend for more than 20 years. There is serious business for the pope in Poland, matters that cut to the core of his chief concerns. Although media coverage will likely accent the sentimental, it would be a mistake to read these three days exclusively as a sort of rolling post-mortem tribute. On the basis of conversations with Vatican officials over the last several days, here’s how the big-ticket concerns stack up from their point of view. 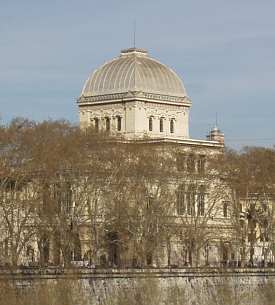 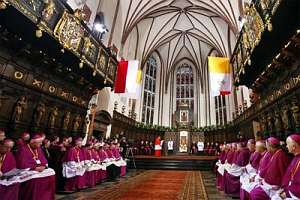 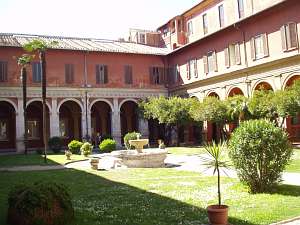 Fiction : The Priory of Sion is an ancient group charged with protecting the secret of the real Holy Grail, and Leonardo da Vinci was a Grand Master of the Priory of Sion.

Fact : The Priory of Sion was established in 1956 by a crackpot Frenchman who was exposed as a fraud in the French media in the 1980s. The documents claiming Leonardo’s role were forged and planted in French archives in the 1960s. Since there was no Priory of Sion in the way that The Da Vinci Code describes it, Leonardo couldn’t have been a part of it. Simple logic.

Fiction : Politics determined what Gospels made it into the Bible.

Fact : By the mid-second century, Matthew, Mark, Luke and John were widely accepted as the foundational texts of Christianity. The criteria had nothing to do with gender or power. It was all about whether they reflected the witness of the apostles about Jesus, how old they were, and how useful they were for the entire church, instead of just a small group.

Fiction : Constantine invented the divinity of Christ in 325.

Fact : Even a cursory look at textual evidence shows that Christians worshipped Jesus as Lord long before Constantine’s reign. The Council of Nicaea was called to address a heresy called Arianism, which taught that Jesus wasn’t fully divine.

Fact : The Gospels are all very forthright about Jesus’ familial relations, and they don’t hide the existence of Mary Magdalene, either. If they had been married, there would have been no reason to hide the fact.

Fact : Mary Magdalene is a saint. In every Gospel, she is cited as the first person to find the empty tomb. She was the second-most revered saint of the Middle Ages, after Mary, Jesus’ mother. That’s an odd way to demonize.

First Things skriver om ham:
«Jaroslav Pelikan died on Saturday at age eighty-two. The funeral is Wednesday morning at St. Vladimir’s Orthodox Seminary in Crestwood, New York, beginning at nine o’clock. Jaroslav Pelikan was in the estimation of many the twentieth century’s most distinguished historian of Christianity. He taught at Yale from 1962 to 1996 and was the immediate past president of the American Academy of Arts and Sciences. A pastor and the son of a pastor of the Lutheran Church–Missouri Synod, Pelikan entered into communion with the Orthodox Church in 1998.