The first document of the Second Vatican Council, Sacrosanctum Concilium, states “The use of the Latin language is to be preserved in the Latin rite” (para. 36). The postconciliar document on sacred music, Musicam sacram, states, “Care must be taken that the faithful may also be able to say or sing together in Latin those parts of the Ordinary of the Mass which pertains them.” The liturgy document stated, “since the use of the mother tongue, whether in the Mass, the administration of the sacraments or other parts of the liturgy, frequently may be of great advantage to the people, the limits of its employment may be extended. This will apply in the first place to the readings and directives, and to some of the prayers and chants” (para. 36). The Council is clear that Latin is to be continued to be used in the liturgy, while the vernacular is an option. Therefore, even if we have vernacular in the Mass, we should still also have Latin in the Mass as well

Q. But isn’t going back to Latin a bad thing? Shouldn’t we be moving forward?

The Mass is actually still in Latin; we just experience in many of our parishes the full extent of permission to use English. The Church never abandoned the Latin, although in many places parishes did not fulfill the express will of the Council Fathers. There is no question of going back; we are actually just now beginning to do what the Council asked. …

Father J wrote:
«My celebration of the Novus Ordo is now tempered and has been considerably enhanced by what I feel when celebrating the TLM and the “continuity” of the Rite’s seem to make more sense, though I feel I am supplementing from the old when celebrating the new. I know it is wrong to say it, but the Mass feels like The Mass in the extraordinary form and “extraordinary” seems a very fitting way to describe this awe inspiring rite.»

Note here that learning the older form of Mass has changed the way this priest says the Novus Ordo. This is a major reason why Pope Benedict issued Summorum Pontificum, folks. He knew that as the use of the older Mass would spread, those priests would rethink the way they said Mass. They would therefore also rethink who they are. …

Fr. John Boyle said:
«It is thanks to laity that I now celebrate the Extraordinary Form on a regular basis for those faithful who adhere to it. It has transformed my priesthood and my celebration of the Mass. … Like others, when celebrating the Novus Ordo facing the people, I do so with a crucifix upstanding on the altar. I am now less conscious of any need to ‘interact’ with the faithful, I choose options less frequently and now adopt the Confiteor and Roman Canon as the default options for the celebration of Mass on all days. All subjectivism is removed. … In the fixed older usage, such clerical domination is impossible.»

Again, a priest changes how he says the Novus Ordo. Also, note that one cannot be so «clerical» in the negative sense, because the priest is controlled so closely by the older rubrics. That drifts over into the way he says the newer Mass.

On September 23 I walked down the center aisle of our parish church, genuflected and made the sign of the cross while saying, In nomine Patris, et Filii, et Spiritus Sancti. Thus began my first Mass according to the Roman Missal of 1962 more than 22 years after my first experience of celebrating the Eucharist. When Pope Benedict XVI issued his letter of July 7 eliminating most restrictions on the use of the so-called Tridentine Mass, my reaction oscillated between mild irritation (Will this ignite conflict? How will we ever provide such Masses?) and vague interest (Is there perhaps some hidden treasure in the old Mass?). Within a week, letters trickled in. Some demanded a Latin Mass every Sunday, insisting that the pope had “mandated” its regular celebration. Others were more reasonable. In August, I met with a dozen parishioners who wanted the Mass. The meeting became steamy as I explained that I had never said the “old” Mass as a priest and had served such Masses as an altar boy for only two years before everything changed. Some thought I was just feigning ignorance to avoid doing it.

A few days after the meeting, I obtained a 1962 missal, looked through it, and concluded, reluctantly, that I knew more Latin than I had thought. My original cranky demurral crumbled …

Having decided to offer the Tridentine Mass, I began the arduous project of recovering—and reinforcing—my Latin grammar and vocabulary so that I could celebrate the liturgy in a prayerful, intelligible way. As I studied the Latin texts and intricate rituals I had never noticed as a boy, I discovered that the old rite’s priestly spirituality and theology were exactly the opposite of what I had expected. …

The Holy See Press Office released information concerning the meeting for prayer and reflection between the Pope and the members of the College of Cardinals, which took place on November 23 in the Vatican’s New Synod Hall. .. The Pope introduced the theme he had chosen for the day’s discussion, «ecumenical dialogue in the light of prayer and of the Lord’s command: ‘Ut unum sint’.»

Cardinal Walter Kasper, president of the Pontifical Council for Promoting Christian Unity, then «provided a broad outline of the current situation of ecumenical dialogue and relations, focussing on three main areas: relations with the ancient Churches of the East; relations with the ecclesial communities that came into being in the wake of the Reform of the 16th century; relations with charismatic and Pentecostal movements that developed above all during last century.»

Cardinal Kasper also presented «the results achieved in each of these fields, describing progress made to date and problems still outstanding.» … 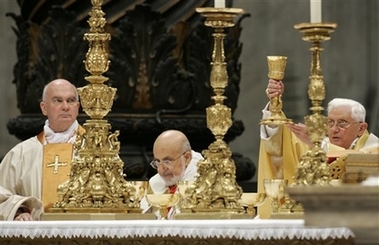 Spesielt når dialogene kom til gradvis større (delvis) enighet om ulike spørsmål, kjørte man seg fast etter hvert, skriver Dulles: And yet, valuable though it was, the convergence method was not without limitations. Each new round of dialogue raised expectations for the future. The next dialogue, at the price of failure, was under pressure to come up with new agreements. The process would at some point reach a stage at which it had delivered about as much as it could. It would eventually run up against hard differences that resisted elimination by this method of convergence. When the dialogues attempted to go beyond convergence and achieve full reconciliation on divisive issues, they sometimes overreached themselves.

Likevel avslutter han sin artikkel på en mer positiv måte: Each party will engage in ecumenical dialogue with its own presuppositions and convictions. As a Roman Catholic, I would make use of the methods by which my church derives its distinctive doctrines. I would also expect that any reunion to which Catholics can be a party would have to include as part of the settlement the Catholic dogmas, perhaps reinterpreted in ways that we do not now foresee. Other churches and ecclesial communities will have their own expectations. But all must be open to possible conversion. We must rely on the Holy Spirit to lead us, as Vatican II recommended, “without obstructing the ways of divine Providence and without prejudging the future inspiration of the Holy Spirit.” …

The 80-year-old Pontiff is planning a purification of the Roman liturgy in which decades of trendy innovations will be swept away. This recovery of the sacred is intended to draw Catholics closer to the Orthodox and ultimately to heal the 1,000 year Great Schism. But it is also designed to attract vast numbers of conservative Anglicans, who will be offered the protection of the Holy Father if they covert en masse.

The liberal cardinals don’t like the sound of it at all. Ever since the shock of Benedict’s election, they have been waiting for him to show his hand. Now that he has, the resistance has begun in earnest …

The Holy Father will arrive in Washington on April 15. The next day, his 81st birthday, he will receive an official welcome at the White House. Later that afternoon, he will address the U.S. bishops’ conference.On April 17, after celebrating Mass at the Washington Nationals’ stadium, the Pope will give an address at the Catholic University of America.

Benedict XVI will be in New York on April 18, for a visit to the United Nations in the morning and an ecumenical meeting in the afternoon. His time in New York will also include Mass at St. Patrick’s Cathedral on April 19, the anniversary of his papal election, and a meeting with youth. On April 20, the Holy Father will visit ground zero, where the twin towers stood. That afternoon, the trip will officially end with Mass at Yankee Stadium.

Anticipation
«This is a blessed moment for our nation,» said Bishop William Skylstad of Spokane, president of the U.S. episcopal conference. «Pope Benedict is not just the leader of Catholics, he is also a man of inspiration for all those who work for peace.»

Cardinal Edward Egan of New York said that the response of the people of his archdiocese «was both rejoicing and thanksgiving to the Lord for the great grace of the presence of the successor of St. Peter in our midst. I have assured the Holy Father of a warm and prayerful welcome. We all look forward to his visit with pleasure and anticipation.»

Archbishop Donald Wuerl of Washington said, «Personally, and in the name of all of the clergy, religious and faithful of the archdiocese, I express our warmest welcome while renewing our sentiments of love and loyalty to our Holy Father. We all look forward to his visit as a time of renewal of our faith and pastoral ministry and an opportunity to confirm our solidarity with the Church universal made visible among us by the successor to Peter, Pope Benedict XVI.»