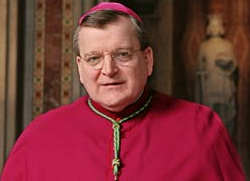 In an interview with the magazine, Radici Christiane, Archbishop Burke pointed out that there is often a lack of reverence at Mass when receiving Communion. “Receiving the Body and Blood of Christ unworthily is a sacrilege,” he warned. “If it is done deliberately in mortal sin it is a sacrilege.”

To illustrate his point, he referred to “public officials who, with knowledge and consent, uphold actions that are against the Divine and Eternal moral law. For example, if they support abortion, which entails the taking of innocent and defenseless human lives. A person who commits sin in this way should be publicly admonished in such a way as to not receive Communion until he or she has reformed his life,” the archbishop said.

“If a person who has been admonished persists in public mortal sin and attempts to receive Communion, the minister of the Eucharist has the obligation to deny it to him. Why? Above all, for the salvation of that person, preventing him from committing a sacrilege,” he added.

“We must avoid giving people the impression that one can be in a state of mortal sin and receive the Eucharist,” the archbishop continued. “Secondly, there could be another form of scandal, consisting of leading people to think that the public act that this person is doing, which until now everyone believed was a serious sin, is really not that serious – if the Church allows him or her to receive Communion.”