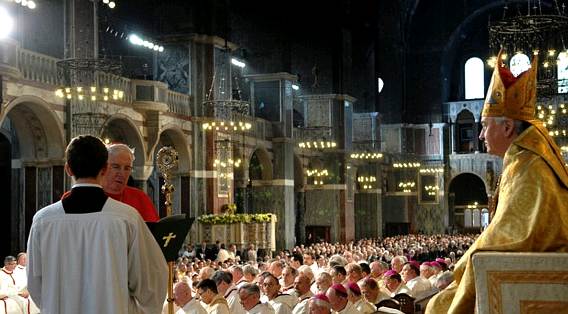 En svært høytidelig messe, så vidt jeg kan lese, med nydelig musikk bl.a. En kommentator skriver: During the entire installation and Mass the cathedral was flooded by sunlight and both within and without there was a crystal quality of light which made all shiny surfaces, whether marble, silver or jewels, gleam with reflected light. This symbolized and echoed the general feeling of optimism and good will towards Archbishiop Nichols at the start of his period of office. He has a demanding and difficult task as leader of the Catholic Church in England at a period of aggressive secularism but this was a day of and for the Church and nothing could have been accomplished better. It was magnificent and the essential clarity of the Roman Rite was performed in an exemplary form which demonstrated its qualities precisely and presented a model of how a Solemn Pontifical Mass should be accomplished. Above all, it was not merely a show but an occasion of profound spiritual significance for the Church in England. The Archbishop’s sermon was outstanding and offered hope for the future. There was silence before and throughout and only a ripple of applause at the end when the Archbishop left the cathedral. Few present will forget it.