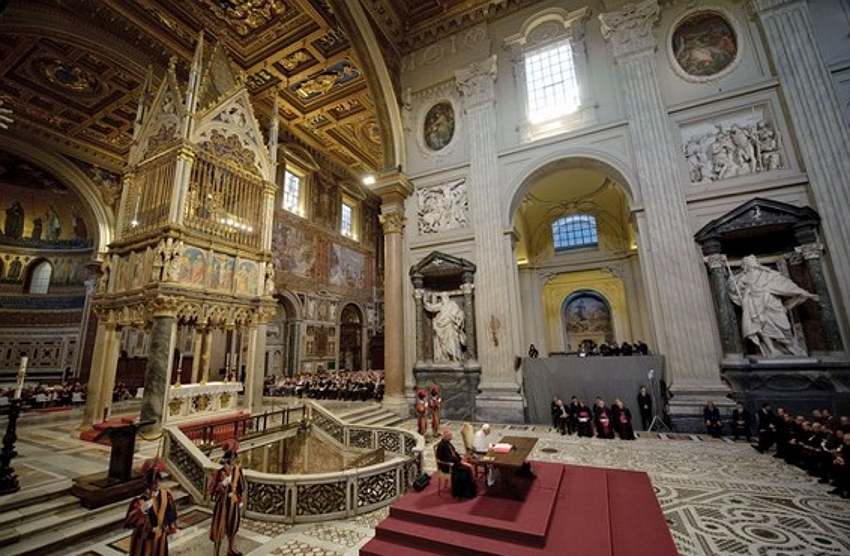 The Second Vatican Council, wishing to pass on the pure and integral doctrine on the Church, matured over the course of two thousand years, gave it “a more meditated definition”, illustrating mostly its mysterious nature, that is, as “a reality imbued with the divine presence, and for this always capable of new and deeper explorations” (Paul VI, Opening Address to the Second Session, September 29, 1963).

That is, the Church, which has her origin in the trinitarian God, is a mystery of communion. As a communion, the Church is not a solely spiritual reality, but lives in history, that is to say, in flesh and blood. The Second Vatican Council describes her “as a sacrament, or sign and instrument of the intimate union with God and of unity with the entire human race” (Lumen Gentium, 1). And the essence of the sacrament is exactly that [in it] the invisible is touched in the visible, that the touchable visible opens the door unto God himself. The Church, we said, is a communion, a communion of people who, through the action of the Holy Ghost, form the People of God that is, at the same time, the Body of Christ.

Let us reflect a little on these two key concepts. The concept of the “People of God” originated and developed in the Old Testament: to enter in the reality of human history, God elected a particular people, the people of Israel, so that it could be his people. The intent of this particular choice is to reach, through the few, the many, and through the many, all. The intent, in other words, of the particular election is universality. Through this People, God truly enters history in a concrete manner. And this opening to universality is effected on the Cross and by the resurrection of Christ. On the Cross, thus says Saint Paul, Christ destroyed the wall of separation. Giving us his Body, He reunites us in this his Body to make us one single thing. In the communion of the “Body of Christ”, all become one single people, the People of God, where – to quote Saint Paul anew – all are one single thing, and there is no longer a distinction, a difference, between Greek and Jew, circumcised and uncircumcised, barbarian, Scythe, slave, Hebrew, but Christ is all things in all. He destroyed the wall of distinction of peoples, of races, of cultures: we are all united in Christ. Thus, we see that both concepts – “People of God” and “Body of Christ” – complete each other and jointly form the concept of Church of the New Testament.

The first Eucharistic Prayer, called the Roman Canon, written in the Fourth Century, distinguishes between the servants – “we Thy servants” – and “plebs tua sancta” [“Thy holy people”]; therefore, it wills a distinction, it speaks of servants and of plebs sancta, and the expression “People of God” expresses all together in their being the Church in common.

Following the Council, this ecclesiological doctrine was widely welcomed and, thanks to God, many good fruits matured in the Christian community. We must also recall, however, that the reception of this doctrine in the praxis and, therefore, its assimilation by the tapestry of the ecclesial conscience did not take place always and everywhere without difficulty and according to a just interpretation.

As I had the occasion to clarify in the address to the Roman Curia of December 22, 2005, an interpretive current, appealing to a supposed “spirit of the Council”, intended to establish a discontinuity and even a contraposition between the Church before and the Church after the Council, at times confusing the very objectively existing boundaries between the hierarchical ministry and the responsibility of the lay faithful in the Church.

The notion of the “People of God”, in particular, was interpreted by some according to a purely sociological vision, with an almost exclusively horizontal severance … …