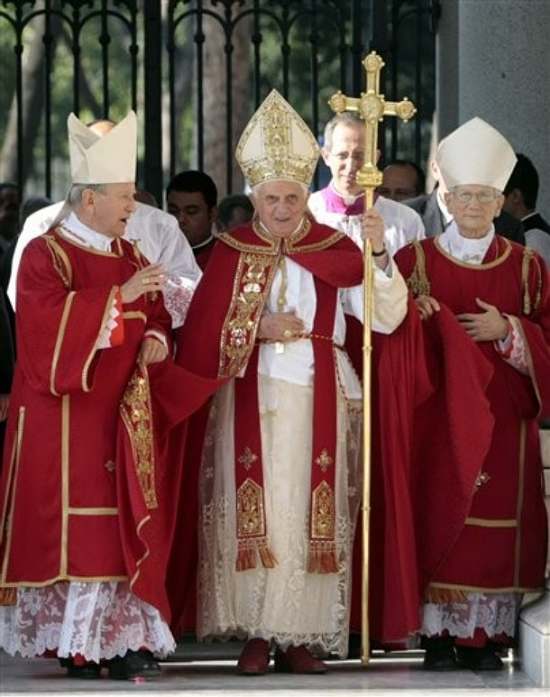 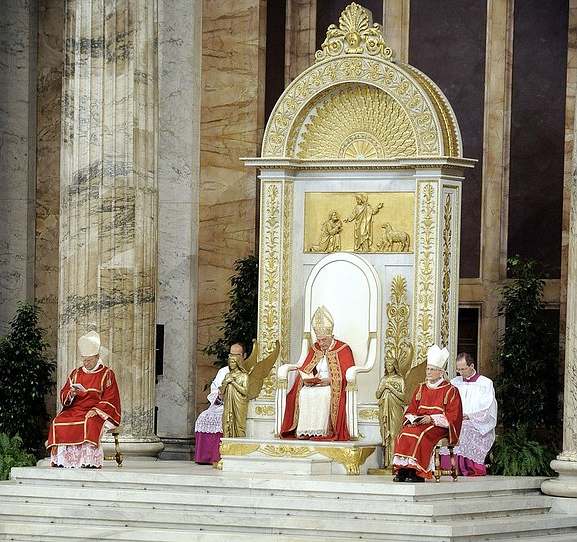 OPPDATERING:
Her er et ganske utførlig engelsk referat av pave Benedikts tale denne kvelden (fra Vatican Information Service):
Benedict XVI, standing before the sarcophagus of the Apostle Paul which lies under the main altar, recalled how a recent scientific analysis of the tomb had revealed the presence of a costly purple linen fabric, grains of incense and bone fragments which a carbon-14 test has dated to the first or second centuries. “This”, he said, “seems to confirm the unanimous and uncontested tradition that these are the mortal remains of the Apostle Paul, and it fills our heart with profound emotion”.

Paul, said the Holy Father, remains the “‘Master of the Gentiles’ who wished to carry the message of the risen Christ to all men and women, because Christ has known and loved them all, He died and rose again for them all”. In his Letter to the Romans the Apostle makes it clear “that with Christ a new way of venerating God, a new form of worship, has begun. … It is no longer things that are offered to God, it is our very lives that must become praise of God”.

This Letter uses two decisive words, “transformation and renewal”, said the Pope and he went on: “We must become new men and new women, transformed in a new way of existence. The world is always seeking novelty because, quite rightly, it is always discontented with concrete reality. Paul tells us that the world cannot be renewed without new men and women. … The Apostle exhorts us to non-conformity. In this Letter he tells us not to succumb to the blueprint of the current age”.

Paul explains this process more clearly “saying that we become new if we transform our way of thinking” and that “such renewal must be complete. … The mind of old man, the common way of thinking, generally aims at possession, wellbeing, influence, success, fame and so on. But this has too limited a scope; in the final analysis, it is the ‘self’ that remains at the centre of the world. We must learn to think more deeply, … we must learn to understand God’s will so that it moulds our own will, so that we ourselves want what God wants, so that we recognise that what God wants is beautiful and good”.

In his Letter to the Ephesians, the Apostle says that “with Christ we must reach adulthood, mature humanity. … Paul wants Christians to have ‘responsible’ faith, ‘adult’ faith. The phrase ‘adult faith’ has become a common slogan over recent decades. It is often understood as the attitude of those who no longer listen to the Church and her pastors, but autonomously choose what they wish to believe and not to believe: a sort of ‘do-it- yourself’ faith. This is also presented as the ‘courage’ to go against the Magisterium of the Church. The truth, however, is that it requires no courage because one is always certain of garnering public sympathy.

“What does require courage”, he added, “is to adhere to the faith of the Church even if this contradicts the blueprint of the modern world. It is the ‘non-conformity’ of faith that Paul calls ‘adult faith’. What he considers childlike is to charge after all the winds and currents of the age”.

The Holy Father went on: “Part of adult faith, for example, is commitment to the inviolability of human life from the very first moment, thus radically opposing the principle of violence by defending the most helpless human creatures. Part of adult faith is recognising lifelong marriage between a man and a woman, as ordained by God and re-established by Christ. Adult faith does not allow itself to be blown here and there by the slightest breeze”.

“Yet Paul does not limit himself to mere negation, he leads us on to the great ‘yes’. … The new way of thinking that faith has given us is primarily directed towards truth. The power of evil is falsehood. The power of faith, the power of God, is truth. … God makes Himself visible to us in the face of Jesus Christ. And looking at Christ we recognise another thing: that truth and charity are inseparable”.

“The Apostle tells us that, by working according to truth in charity, we contribute to ensuring that everything – the universe – develops towards Christ. On the basis of his faith, Paul is not simply concerned for our personal rectitude or for the growth of the Church. … The ultimate goal of Christ’s work is the universe, the transformation of the universe, of the entire human world, of all creation. Those who, together with Christ, serve the truth in charity contribute to the true progress of the world”.

Finally, Benedict XVI recalled how in the Letter to the Ephesians the Apostle speaks of the need to strengthen “‘inner being’. … The inner vacuum – the weakness of inner being – is one of the great problems of our age”, he said. “Inner life must be strengthened: the perception of the heart, the capacity to see and understand the world and mankind from within, with the heart. We need a reason illuminated by the heart so as to learn to act according to the truth in charity”.