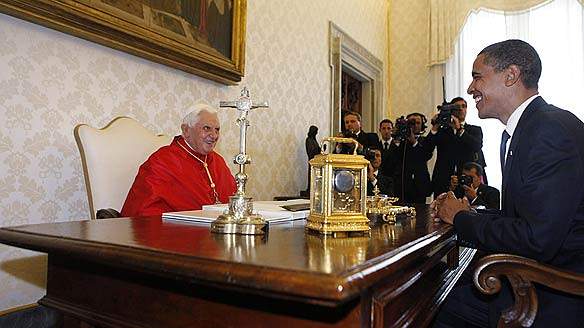 Pope Benedict XVI stressed the church’s opposition to abortion and stem cell research in his first meeting with President Barack Obama on Friday, pressing the Vatican’s case with the U.S. leader who is already under fire on those issues from some conservative Catholics and bishops back home.

The 30-minute meeting Vatican audience was described by both sides as positive _ constructive talks between two men who agree on helping the poor and pushing for Middle East peace but disagree on what the Vatican considers prime ethical issues.

“It’s a great honor,” Obama said, greeting the pope and thanking him for this first meeting.

Afterward, the Vatican said the leaders discussed immigration, the Middle East peace process and aid to developing nations. But the Vatican’s statement also underscored the pair’s deep disagreement on abortion.

“In the course of their cordial exchanges, the conversation turned first of all to questions which are in the interest of all and which constitute a great challenge … such as the defense and promotion of life and the right to abide by one’s conscience,” the statement said.

Even in his gift to the U.S. leader, the pope sought to underscore his beliefs. Benedict gave Obama a copy of a Vatican document on bioethics that hardened the church’s opposition to using embryos for stem cell research, cloning and in-vitro fertilization. Obama supports stem cell research.

“Yes, this is what we had talked about,” Obama said, telling the pope he would read it on the flight to his next stop, Ghana.

Earlier, the pope’s secretary, the Rev. Georg Ganswein, told reporters the document would “help the president better understand the position of the Catholic church.”