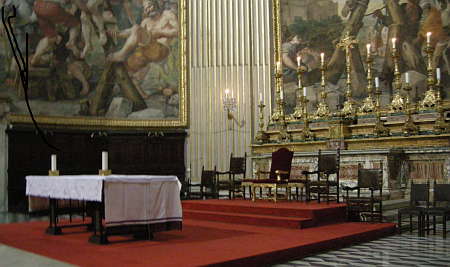 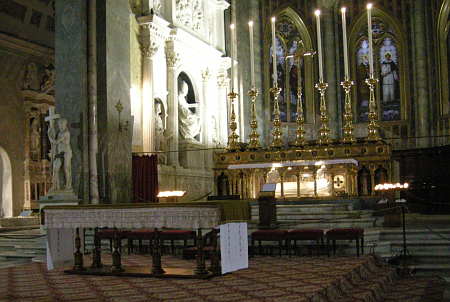 I’ve long been convinced of the case for the celebrant’s facing East during Mass, to preserve the symbolism of a people led by the priest in procession, and also because facing the people has given the impression that the celebrant is performing for the people. It is not just the direction that he faces that is reoriented. It is the focus of the liturgy itself that becomes reoriented.

However, it is not until just today that I full appreciated the negative and revolutionary effect that Mass facing the people had on the historic experience of the faith. I’m touring chapels and cathedrals in Salamanca, Spain. It is heartbreaking to see these grand and glorious high altars and then a tiny little table in front, put there in 1970-something, for the priest to stand facing the people. In the stunning chapel of the St. Esteban Convent, it would appear as if the high altar was actually removed and replaced with a table, therefore removing the theological rationale for the entire wall behind the altar and even refocusing the purpose and goal of the entire structure itself.

In short, this just isn’t working. It makes no sense architecturally, theologically, or liturgically. Being here, amidst structures 1000 years old, you realize what incredible implications the turn around truly had, almost akin to an act of violence.