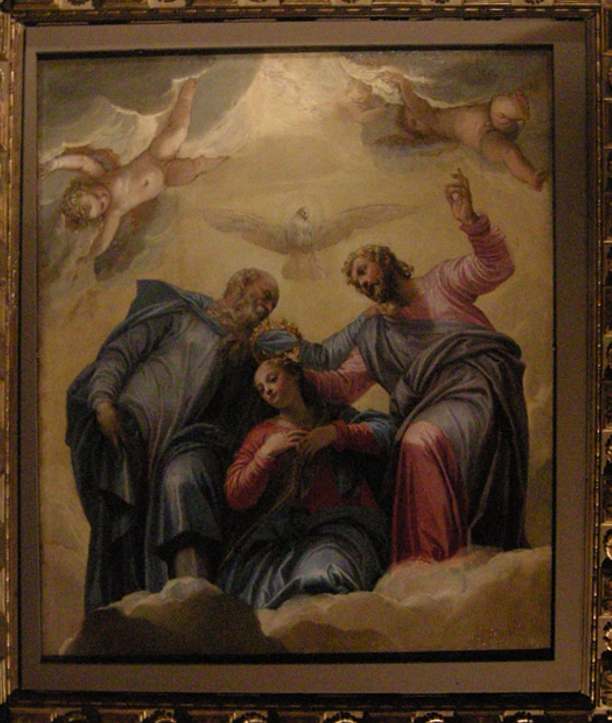 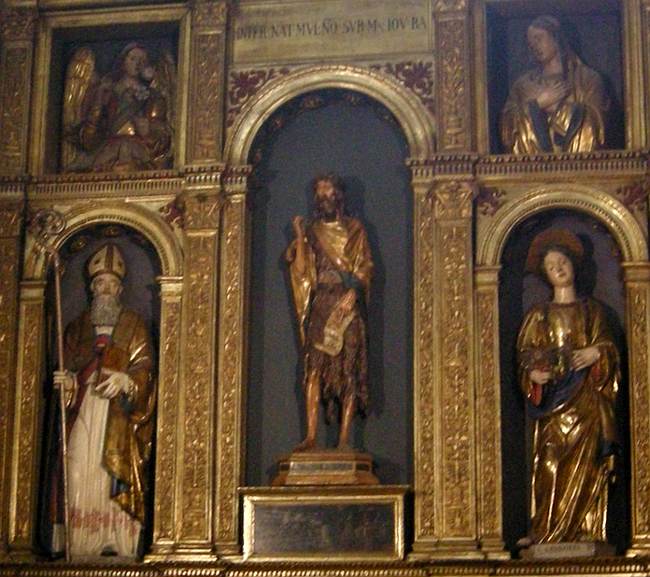 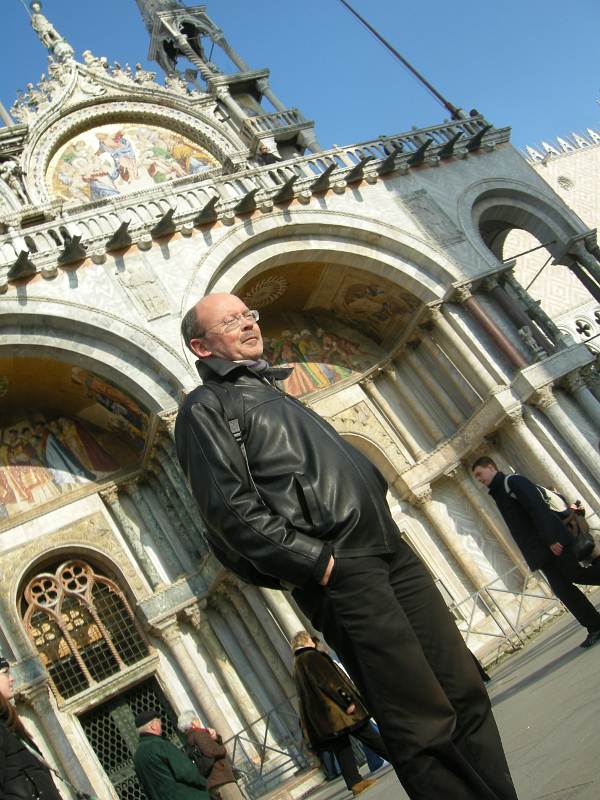 Zenit.org melder at pave Benedikt i går, på Lætare søndag, deltok i en ordets gudstjeneste i den lutherske kirken på via Sicilia i Roma. De skriver bl.a.:
In the German-language service, in which both the Pope and a Lutheran pastor gave homilies, the Pontiff affirmed, “We hear many laments about the fact that there are no new developments in ecumenism, but we must say, and we can say it with much gratitude, that there have already been elements of unity.”

Benedict XVI was welcomed with prolonged applause in the Christuskirche on the Via Sicilia in Rome. The choir, composed of Lutherans and German Catholic seminarians, intoned Mozart’s “Jubilate Deo.” … …

… In his remarks, the Pope cautioned against being content and resting “with the successes of the ecumenism of recent years.” He noted that still “we cannot drink of the same chalice and we cannot be together around the altar.” The Pontiff continued, “This should make us sad because it is a sinful situation, but unity cannot be created by men.”

“We must entrust ourselves to the Lord, because he is the only one that can give us unity,” the Holy Father affirmed. “Let us hope that he will bring us to this unity that we now await.”

After the Sunday service, the Pope participated in a fraternal gathering with community and its pastor. 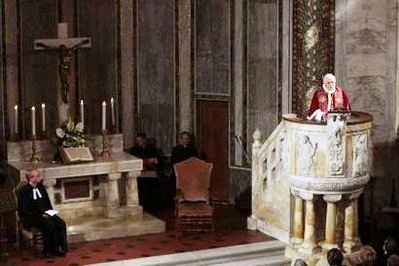 WWW.CHIESA skriver om Msgr. Charles J. Scicluna is the “promoter of justice” of the Congregation for the Doctrine of the Faith. He is effectively the prosecutor of the tribunal of the former Holy Office, whose job it is to investigate what are known as “delicta graviora;” i.e., the crimes which the Catholic Church considers as being the most serious of all: crimes against the Eucharist and against the sanctity of the Sacrament of Penance, and crimes against the sixth Commandment (“thou shall not commit impure acts”) committed by a cleric against a person under the age of eighteen.

A: Overall in the last nine years (2001-2010) we have considered accusations concerning around three thousand cases of diocesan and religious priests, which refer to crimes committed over the last fifty years.

Q: That is, then, three thousand cases of paedophile priests?

A: No, it is not correct to say that. We can say that about sixty percent of the cases chiefly involved sexual attraction towards adolescents of the same sex, another thirty percent involved heterosexual relations, and the remaining ten percent were cases of paedophilia in the true sense of the term; that is, based on sexual attraction towards prepubescent children. The cases of priests accused of paedophilia in the true sense have been about three hundred in nine years. Please don’t misunderstand me, these are of course too many, but it must be recognised that the phenomenon is not as widespread as has been believed.

Les sida i større format her. 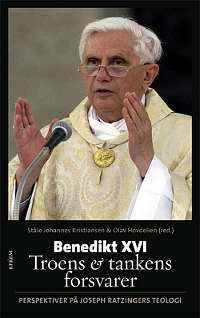 I sitt foredrag sa kardinalen bl.a.:
Union with the Catholic Church is the goal of ecumenism—one could put, “we phrase it that way”. Yet the very process of working towards union works a change in churches and ecclesial communities that engage one another in dialogue, in actual instances of entering into communion do indeed transform the Catholic Church by way of enrichment. Let me add right away that when I say enrichment I am referring not to any addition of essential elements of sanctification and truth to the Catholic Church. Christ has endowed her with all the essential elements. I am referring to the addition of modes of expression of these essential elements, modes which enhance everyone’s appreciation of the inexhaustible treasures bestowed on the Church by her divine founder.

Så til intervjuet med p. Touze:
ZENIT: Is celibacy a dogma of faith or a discipline?

Father Touze: Neither one nor the other. It isn’t a dogma of faith because we see married priests in the Church today such as, for example, some [priests] of the Eastern Catholic Church. Not all but some admit married priests. Or as has been reminded recently in the Holy Father’s motu propio “Anglicanorum coetibus,” published last Nov. 4: Among the ex-Anglicans who want to return to communion with the Catholic Church, there will be married priests admitted.

ZENIT: With this measure, do you think that one day, celibacy might become voluntary also for priests of the Latin rite?

Father Touze: No, because the Church is understanding more and more the relation between priesthood, episcopate and celibacy. It is something that could be likened to the revelation of a dogma, though it isn’t so at this time; one tends increasingly to understand that a practice must be promoted among all priests and also among Eastern Catholic priests which is truly similar to the one lived in the first centuries.

Archbishop Charles Chaput of Denver, who illustrates yet another way a bishop can matter: As an evangelist, an opinion-maker, a writer and speaker. Usually seen as a strong conservative, Chaput can be polarizing because he takes clear positions and defends them with relish. He’s consequential in somewhat the same way as politicians and pundits with bold views and the nerve not to pull their rhetorical punches: Love ‘em or hate ‘em, they’re hard to ignore.

Sometimes accused of being a traditionalist, Chaput is actually a very 21st century bishop in at least one sense: Whatever national influence he wields has almost nothing to do with formal ecclesiastical power. He doesn’t hold office in the bishops’ conference, and certainly can’t compete with Rigali as a Roman heavyweight. I mean no disrespect to Denver, especially since my wife and I now live there, but the mere fact of being the Archbishop of the Rockies is hardly sufficient to leave many people outside the Mountain Time Zone with baited breath awaiting his latest pronouncement.

… …. If you want a sound-bite to sum up Chaput’s message, here’s a recent epigram: “There’s no more room in American life for easy or tepid faith.” Like all such formulae, it’s an invitation to debate: What exactly does that mean?

One of the ironies in my talk tonight is this. I’m a Catholic bishop, speaking at a Baptist university in America’s Protestant heartland. But I’ve been welcomed with more warmth and friendship than I might find at a number of Catholic venues. This is a fact worth discussing. I’ll come back to it at the end …

I’m here as a Catholic Christian and an American citizen — in that order. Both of these identities are important. They don’t need to conflict. They are not, however, the same thing. … No nation, not even the one I love, has a right to my allegiance, or my silence, in matters that belong to God or that undermine the dignity of the human persons He created.

Fifty years ago this fall, in September 1960, Sen. John F. Kennedy, the Democratic candidate for president, spoke to the Greater Houston Ministerial Association. … His speech left a lasting mark on American politics. It was sincere, compelling, articulate — and wrong. Not wrong about the patriotism of Catholics, but wrong about American history and very wrong about the role of religious faith in our nation’s life. And he wasn’t merely “wrong.” His Houston remarks profoundly undermined the place not just of Catholics, but of all religious believers, in America’s public life and political conversation. Today, half a century later, we’re paying for the damage. … …

For the better part of five years, plenty of experts on Catholic liturgy have been waiting for the “real” agenda of Pope Benedict XVI, known as a traditionalist on matters of worship, to emerge from beneath a façade of patience seemingly built on dropping hints rather than imposing sweeping new rules. Now, however, the pope’s own liturgist insists that the patient façade is actually the agenda.

One month ago, that papal liturgist, Msgr. Guido Marini, sparked wide debate with his public call for a “reform of the reform,” suggesting to some a desire to roll back the clock on liturgical reforms associated with the Second Vatican Council (1962-65). However, Marini insists that no such rollback is underway, and no dramatic new rules are in the works.

When Benedict employs more traditional touches in his own liturgies, such as giving Communion on the tongue, those amount to “proposals,” Marini said, intended to gradually influence the church’s liturgical culture, and are not harbingers of forthcoming papal edicts.

“I don’t believe that the liturgy of the church needs any radical changes or distortions,” Marini said, saying he “fully” agrees with a comment from then-Cardinal Joseph Ratzinger, now Pope Benedict XVI, that Catholic liturgy needs a “period of stability” after the wave of dramatic, and at times contentious, reforms that flowed from Vatican II.