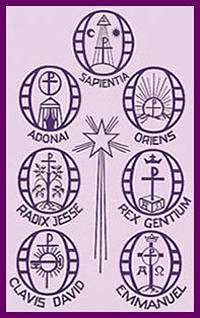 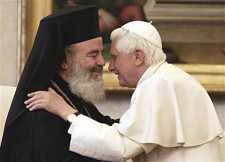 Benedict XVI recalled the important steps that have been taken in the relationship between Catholics and Greek Orthodox, as a result of John Paul II’s visit to that country in May 2001, and then he invited his guest to turn «our gaze towards the future,» to address «an enormous field in which our mutual and pastoral collaboration will be able to grow.»

«Catholics and Orthodox are called to offer their cultural and, above all, their spiritual contribution,» the Holy Father said. «They have the duty to defend the Christian roots of the Continent, which have forged it in the course of the centuries, and thus allow Christian tradition to continue manifesting itself and operating with all its forces to safeguard the dignity of the human person, respect of minorities, being careful to avoid a cultural uniformity that would run the risk of losing immense riches of civilization.»

In his speech, Archbishop Christodoulos addressed virtually the same topics raised by the Pope.

«We come,» the Orthodox leader said, «to visit the eminent theologian and university professor, the assiduous researcher of ancient Greek thought and of the Greek Fathers of the East; but also the visionary of Christian unity and cooperation of religions to ensure the peace of the whole world.»

The archbishop said his visit offered the opportunity «to undertake a new stage on the common path of our Churches to address the problems of the present-day world.»

Archbishop Christodoulos spoke of his commitment to «overcome the dogmatic obstacles that hinder the journey of unity in faith» until Orthodox and Catholics attain «full unity,» and can «commune in the precious Body and Blood of the Lord in the same Chalice of Life.»

In this connection, the archbishop of Athens was confident about the work of the mixed international commission that is entrusted with the dialogue between the Orthodox and Catholic Church. The commission met last September in Belgrade, putting an end to years of stagnation.

The numbers speak. Benedict XVI is the most popular pope in history, if by people one understands those whom he draws like a magnet to St. Peter’s Square each Sunday for the Angelus and each Wednesday for the general audience, from Rome and from all over the world.

Attendance is routinely more than twice that seen by his predecessor, John Paul II, who in his turn had shattered all the records. But the most amazing thing is the relationship between the demand and what is on offer. The winning product that Benedict XVI offers to the crowds is made of nothing but his plain words.

At the Angelus, two times out of three pope Joseph Ratzinger explains the Gospel of that Sunday’s Mass to an audience that includes people who don’t go to church every week – and some who don’t go at all. He explains this with simple words, but these demand and receive attention. There is an impressive silence in St. Peter’s Square when he is speaking. And at the end of the very short homily, he immediately begins the Angelus prayer, without even a momentary pause. This is his effective means of preventing an outbreak of applause. This does happen, but at the end of the entire ceremony, at the moment of the greetings in the various languages.

As pope, Benedict XVI doesn’t give an inch to the preconceptions that were formed about him as a cardinal. He doesn’t thunder condemnations, he doesn’t hurl anathemas. He reasons staunchly, but serenely. His criticisms against modernity or against the “pathologies” that he sees even within the Church are fully elaborated. That is part of the reason why he has practically silenced Catholic progressivism: not because this has turned friendly toward him, but because it is not able to reply to him with arguments of similar persuasive power. 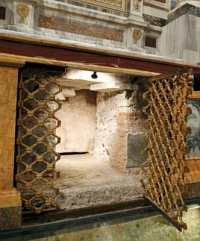 LES ARTIKKELEN I AFTENBLADET HER.

In these days the liturgy reminds us constantly that «God comes» to visit his people, to dwell in the midst of men and to form with them a communion of love and life, that is, a family. John’s Gospel expresses thus the mystery of the Incarnation: «And the Word became flesh and dwelt among us»; literally, «he made his dwelling among us» (John 1:14).

…though it is God who takes the initiative of coming to dwell in the midst of men, and he is always the main architect of this plan, it is also true that he does not will to carry it out without our active cooperation. Therefore, to prepare for Christmas means to commit oneself to build «God’s dwelling with men.» No one is excluded; every one can and must contribute so that this house of communion will be more spacious and beautiful.

At the end of time, it will be completed and will be the «heavenly Jerusalem» … Advent invites us to turn our gaze toward the «heavenly Jerusalem,» which is the ultimate end of our earthly pilgrimage. At the same time, it exhorts us to commit ourselves with prayer, conversion and good works, to welcome Jesus in our lives, to construct with him this spiritual building of which each one of us — our families and our communities — is a precious stone.

Among all the stones that make up the heavenly Jerusalem, certainly the most resplendent and valuable, because of all of them it is the one closest to Christ — the cornerstone — is Mary Most Holy. Through her intercession, let us pray that this Advent will be for the whole Church a time of spiritual building and so speed up the coming of the Kingdom of God.

… On this second Sunday of Advent, the Church puts before us the figure of John the Baptist, the voice crying in the wilderness: «Prepare a way for the Lord». During this Advent season, as we wait in joyful hope for the coming of Christ, let us prepare a place for him in our hearts. I invoke God’s abundant blessings upon all of you, and upon your families and loved ones at home. 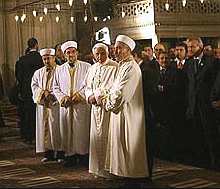 1
“Such multi-religious prayer cannot be the normal form of religious life, but can only exist as a sign in unusual situations in which, as it were, a common cry for help rises up, stirring the hearts of men, to stir also the heart of God.”

2
“A careful explanation of what happens here and what does not happen is most important … [it] must make clear that there is no such thing as a common concept of God or belief in God … What is happening must be so clear in itself, and to the world, that it does not become a demonstration of that relativism through which it would nullify its own significance.”

“On the one hand, we must rediscover the reality of God and the public relevance of religious faith; on the other, we must ensure that the expression of this faith be free, exempt from fundamentalist distortions, and capable of firmly repudiating every form of violence.”

The pope expresses his hope for “joint Christian and Muslim action on behalf of human rights – for life, peace, and justice.”

And he appeals for Turkey and other Muslim countries to establish the “distinction between the civil and religious spheres” that is the heritage of Christian Europe, guaranteeing “practical freedom of worship for the citizen and for religious communities.”

Further on Benedict XVI explains the meaning of his prayer at the Blue Mosque in this way:

“Pausing for a few moments of recollection in that place of prayer, I turned to the one Lord of heaven and earth, the merciful Father of all humanity. May all believers recognize his creatures and bear witness to true brotherhood!”