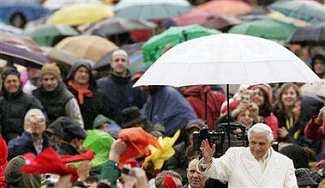 A record 130,000 persons – almost twice the anticipated number – showed up in St. Peter’s Square today, in driving rain, for the assembly which marked the 25th anniversary of Pontifical recognition for C&L, the ecclesiastical movement founded by Don Luigi Giussani. …

The Pope, in his address, paid tribute to and expressed gratitude for the work of C&L, a movement born in 1970 to give witness to the world about “the beauty of being Christian, in an era when the prevailing view is that Christianity is something tedious and too oppressive as a way of life.”

Inevitably, the Pope turned his thoughts to Don Giussani and his search for beauty “which he found in Christ.” Therefore, the Pope said, “he committed himself to awakening among the youth a love for Christ – the Way, the Truth and the Life – reminding them that He alone is the way towards realizing the desires in man’s heart, and that Christ does not save us by ignoring our humanity but through it.”

The Pope said C&L, in carrying out Giussani’s teaching, has become “a community experience of faith” that is present in the Church “not by hierarchical decree and organization” but by “renewed encounter with the faith” motivated by the faithful themselves.