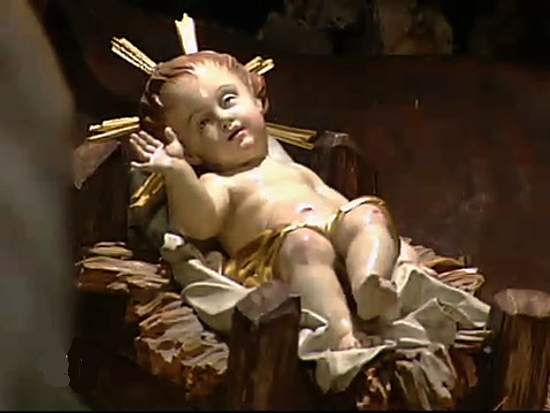 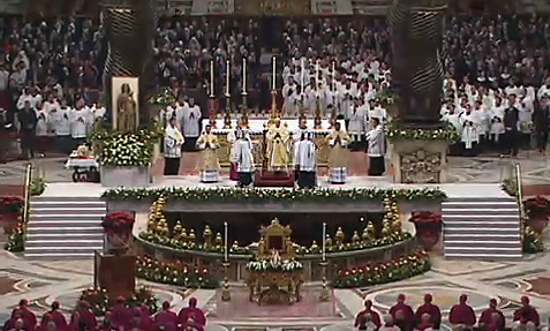 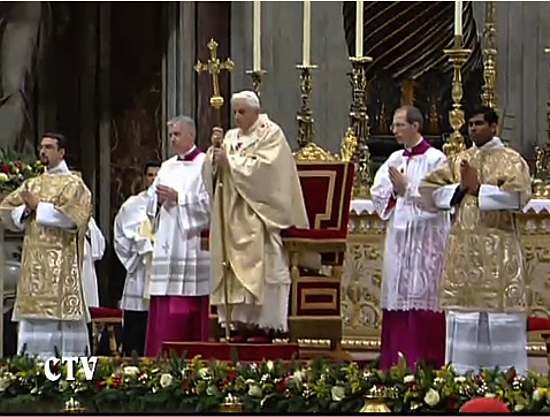 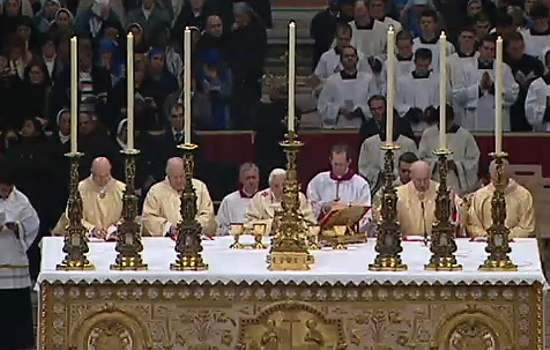 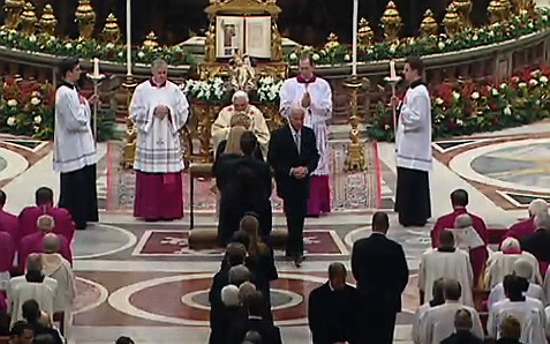 Dear Brothers and Sisters,
“Who is like the Lord our God, who is seated on high, who looks far down upon the heavens and the earth?” This is what Israel sings in one of the Psalms (113 [112], 5ff.), praising God’s grandeur as well as his loving closeness to humanity. God dwells on high, yet he stoops down to us… God is infinitely great, and far, far above us. This is our first experience of him. The distance seems infinite. The Creator of the universe, the one who guides all things, is very far from us: or so he seems at the beginning. But then comes the surprising realization: The One who has no equal, who “is seated on high”, looks down upon us. He stoops down. He sees us, and he sees me. God’s looking down is much more than simply seeing from above. God’s looking is active. The fact that he sees me, that he looks at me, transforms me and the world around me. The Psalm tells us this in the following verse: “He raises the poor from the dust…” In looking down, he raises me up, he takes me gently by the hand and helps me – me! – to rise from depths towards the heights. “God stoops down”. This is a prophetic word. That night in Bethlehem, it took on a completely new meaning. God’s stooping down became real in a way previously inconceivable. He stoops down – he himself comes down as a child to the lowly stable, the symbol of all humanity’s neediness and forsakenness. God truly comes down. He becomes a child and puts himself in the state of complete dependence typical of a newborn child. The Creator who holds all things in his hands, on whom we all depend, makes himself small and in need of human love. God is in the stable. In the Old Testament the Temple was considered almost as God’s footstool; the sacred ark was the place in which he was mysteriously present in the midst of men and women. Above the temple, hidden, stood the cloud of God’s glory. Now it stands above the stable. God is in the cloud of the poverty of a homeless child: an impenetrable cloud, and yet – a cloud of glory! How, indeed, could his love for humanity, his solicitude for us, have appeared greater and more pure? The cloud of hiddenness, the cloud of the poverty of a child totally in need of love, is at the same time the cloud of glory. For nothing can be more sublime, nothing greater than the love which thus stoops down, descends, becomes dependent. The glory of the true God becomes visible when the eyes of our hearts are opened before the stable of Bethlehem.

Saint Luke’s account of the Christmas story, which we have just heard in the Gospel, tells us that God first raised the veil of his hiddenness to people of very lowly status, people who were looked down upon by society at large – to shepherds looking after their flocks in the fields around Bethlehem. Luke tells us that they were “keeping watch”. This phrase reminds us of a central theme of Jesus’s message, which insistently bids us to keep watch, even to the Agony in the Garden – the command to stay awake, to recognize the Lord’s coming, and to be prepared. Here too the expression seems to imply more than simply being physically awake during the night hour. The shepherds were truly “watchful” people, with a lively sense of God and of his closeness. They were waiting for God, and were not resigned to his apparent remoteness from their everyday lives. To a watchful heart, the news of great joy can be proclaimed: for you this night the Saviour is born. Only a watchful heart is able to believe the message. Only a watchful heart can instil the courage to set out to find God in the form of a baby in a stable. Let us ask the Lord to help us, too, to become a “watchful” people.

Saint Luke tells us, moreover, that the shepherds themselves were “surrounded” by the glory of God, by the cloud of light. They found themselves caught up in the glory that shone around them. Enveloped by the holy cloud, they heard the angels’ song of praise: “Glory to God in the highest heavens and peace on earth to people of his good will”. And who are these people of his good will if not the poor, the watchful, the expectant, those who hope in God’s goodness and seek him, looking to him from afar?
The Fathers of the Church offer a remarkable commentary on the song that the angels sang to greet the Redeemer. Until that moment – the Fathers say – the angels had known God in the grandeur of the universe, in the reason and the beauty of the cosmos that come from him and are a reflection of him. They had heard, so to speak, creation’s silent song of praise and had transformed it into celestial music. But now something new had happened, something that astounded them. The One of whom the universe speaks, the God who sustains all things and bears them in his hands – he himself had entered into human history, he had become someone who acts and suffers within history. From the joyful amazement that this unimaginable event called forth, from God’s new and further way of making himself known – say the Fathers – a new song was born, one verse of which the Christmas Gospel has preserved for us: “Glory to God in the highest heavens and peace to his people on earth”. We might say that, following the structure of Hebrew poetry, the two halves of this double verse say essentially the same thing, but from a different perspective. God’s glory is in the highest heavens, but his high state is now found in the stable – what was lowly has now become sublime. God’s glory is on the earth, it is the glory of humility and love. And even more: the glory of God is peace. Wherever he is, there is peace. He is present wherever human beings do not attempt, apart from him, and even violently, to turn earth into heaven. He is with those of watchful hearts; with the humble and those who meet him at the level of his own “height”, the height of humility and love. To these people he gives his peace, so that through them, peace can enter this world.
The medieval theologian William of Saint Thierry once said that God – from the time of Adam – saw that his grandeur provoked resistance in man, that we felt limited in our own being and threatened in our freedom. Therefore God chose a new way. He became a child. He made himself dependent and weak, in need of our love. Now – this God who has become a child says to us – you can no longer fear me, you can only love me.

With these thoughts, we draw near this night to the child of Bethlehem – to the God who for our sake chose to become a child. In every child we see something of the Child of Bethlehem. Every child asks for our love. This night, then, let us think especially of those children who are denied the love of their parents. Let us think of those street children who do not have the blessing of a family home, of those children who are brutally exploited as soldiers and made instruments of violence, instead of messengers of reconciliation and peace. Let us think of those children who are victims of the industry of pornography and every other appalling form of abuse, and thus are traumatized in the depths of their soul. The Child of Bethlehem summons us once again to do everything in our power to put an end to the suffering of these children; to do everything possible to make the light of Bethlehem touch the heart of every man and woman. Only through the conversion of hearts, only through a change in the depths of our hearts can the cause of all this evil be overcome, only thus can the power of the evil one be defeated. Only if people change will the world change; and in order to change, people need the light that comes from God, the light which so unexpectedly entered into our night.

And speaking of the Child of Bethlehem, let us think also of the place named Bethlehem, of the land in which Jesus lived, and which he loved so deeply. And let us pray that peace will be established there, that hatred and violence will cease. Let us pray for mutual understanding, that hearts will be opened, so that borders can be opened. Let us pray that peace will descend there, the peace of which the angels sang that night.

In Psalm 96 [95], Israel, and the Church, praises God’s grandeur manifested in creation. All creatures are called to join in this song of praise, and so the Psalm also contains the invitation: “Let all the trees of the wood sing for joy before the Lord, for he comes” (v. 12ff.). The Church reads this Psalm as a prophecy and also as a task. The coming of God to Bethlehem took place in silence. Only the shepherds keeping watch were, for a moment, surrounded by the light-filled radiance of his presence and could listen to something of that new song, born of the wonder and joy of the angels at God’s coming. This silent coming of God’s glory continues throughout the centuries. Wherever there is faith, wherever his word is proclaimed and heard, there God gathers people together and gives himself to them in his Body; he makes them his Body. God “comes”. And in this way our hearts are awakened. The new song of the angels becomes the song of all those who, throughout the centuries, sing ever anew of God’s coming as a child – and rejoice deep in their hearts. And the trees of the wood go out to him and exult. The tree in Saint Peter’s Square speaks of him, it wants to reflect his splendour and to say: Yes, he has come, and the trees of the wood acclaim him. The trees in the cities and in our homes should be something more than a festive custom: they point to the One who is the reason for our joy – the God who for our sake became a child. In the end, this song of praise, at the deepest level, speaks of him who is the very tree of new-found life. Through faith in him we receive life. In the Sacrament of the Eucharist he gives himself to us – he gives us a life that reaches into eternity. At this hour we join in creation’s song of praise, and our praise is at the same time a prayer: Yes, Lord, help us to see something of the splendour of your glory. And grant peace on earth. Make us men and women of your peace. Amen.