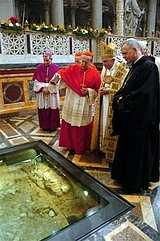 «Listening to the Word of God … is a priority in our ecumenical efforts. Indeed, it is not we who organize the unity of the Church; the Church does not create herself and does not live by herself, but by the Word that comes from the mouth of God.»

«Whoever undertakes to listen to the word of God can and must then speak out and transmit it to others, to those who have never heard it, or to those who have forgotten it and buried it under the ‘thorns’ of the cares and illusions of the world.

«We Christians must ask ourselves,» the Pope added, «whether we have not become too silent. Whether we do not lack the courage to speak out and bear witness. … Our world has need of such witness, it awaits above all the joint testimony of Christians. Unity can clearly not be imposed; it must be shared, and founded on a joint participation in a single faith. Listening and speaking, understanding others and communicating one’s faith are, then, essential dimensions of ecumenical practice. Honest and faithful dialogue is the … indispensable instrument of unity.»

«It is crucial,» he continued, «that ‘doctrine should be clearly presented in its entirety,’ for a dialogue that confronts, discusses and overcomes the differences that still exist between Christians. Yet, at the same time, ‘the way and method in which the Catholic faith is expressed should never become an obstacle to dialogue with our brethren’.»

The Pope highlighted the fact that «ecumenical dialogue … leads to reciprocal spiritual enrichment in the sharing of true experiences of faith and Christian life. For this to happen, we must tirelessly implore the assistance of God’s grace and the illumination of the Holy Spirit.»

At the end of his homily, the Holy Father entrusted to St. Paul, «indefatigable builder of unity in the Church, the fruits of the dialogue and shared testimony we have experienced in many fraternal meetings … during the course of 2006.»

Benedict XVI closed by thanking all those people who «have contributed to intensifying ecumenical dialogue through prayer, and the offer of their suffering and their tireless activities.»